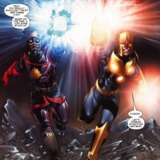 @jonny_anonymous: infinity has been enjoyable, but yet to reach the highs of the 2008 series. Still highly preferable to the Bendis series, however.

the Guardians 1000 are definitely intriguing

I'm a HUGE Surfer fan but I have to go with Superboy Prime here. The guy is a walking plot device, he can literally take as much punishment as the writer want. The guy DESTROYED like half of the GLC and all of DC earths heroes simultaneously.

this was a pretty poor match-up in my opinion, who the hell is madara? When the vast majority of comicvine have no clue who the dude is, it's a poorly done match.

check out War of Kings if you like Gladiator. It pits him and the Imperial Guard+Vulcan against the Kree(Ronan) and the Inhumans. Really awesome, and cemented Gladiator as one of my favorite characters.

evolution may be defined as changes in the characteristics of living thigngs over time. this is an observed phenomenon. for example, earlier than about an billion years ago, all life consisted of single celled organisms. subsequently current and past multicellular species we are familiar with have arisen and some have gone extinct. knowing about genetics, evolution can be defined as CHANGES IN THE FREQUENCY OF DIFFERENT GENE VARIATIONS OVER TIME

The Theory of Evolution is based on two almost obvious ideas

a)the process of reproduction happens with variation, i that offspring are not identical to their parents

creationism and intelligent design interpretations of biology are not science because they do not operate the way science does. they are not parsimonious, ie they do not have a theory that explains many observations with a small set of ideas; particularly, each supposed intervention requires a separate explanation. also they assert that it is impossible to explain certain phenomena in biology when in fact hypotheses that are consistent with evolution can readily be made

Lived without sex so far, my life's been pretty good. Internet on the otherhand has been a part of my entire life, and the way the world is advancing will only become much more influential and necessary. The only meaningful outcome of sex is children, and honestly it won't kill me to miss that experience as MANY others have.

Hell, I'm not even guaranteed to have sex unless I pay for it.The internet however is readily available through a plethora of modern media. Why take a lifelong gamble when I can just access the other option through 5 different devices that I already own?

dude, have sex and then come talk to me. if you have sex and STILL end up choosing the internet, you're doing something wrong.

HAHAHAHAHA How can anyone possibly choose the internet over sex?? Sex is necessary to human life, the internet has only become essential in the past 15 years. I feel like not having the internet to waste my time on would almost force me to better myself lol

Seriously, whoever thinks the internet>sex has not had sex, is terrible at sex, or is ugly as hell and only sleeps with fat ugly chicks. Because sex is flarking incredible.

@technogeek: This is cleary about the debate above. But as long as the change is done for a reson and opens plot points it would be ok.

from your comments, I'm assuming you've never actually read the first 150 issues of ASM, non? Peter is a totally different character than the scrawny loser he is now

godslayer isn't manmade, it can literally cut through anything. and its not like gamora is going to run directly at hulk lol she has a whole team to work with