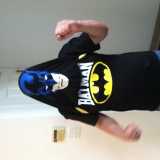 How do I create a poll?

Can someone show me how to create a poll?

You know how Lois is almost always killed off in alternate reality stories like Kingdom Come and Injustice, and then at the end Supes and WW hookup? Well with Wonder Woman now Supes love interest, will DC start doing the opposite? Have WW die in the beginning of the story and then Supes and Lois marrying and having kids. I think that is a sign that a female character has made it as a love interest for Superman. You know they fridge you.

This thread's purpose is to support the romantic pairing of Batman and Wonder Woman.

Please post why you love the pairing of the Amazon princess and Her Dark Knight and how will DC will build a better story with them together.

In JLA, Katana is Diana's counterpart. I think it is a poor choice, Katana uses only a sword to fight. Granted it is magic but still they could of went with a better choice. I think they should of went with Isis (Adriana Tomaz). She is in Diana's power range and could reasonably beat Diana. Isis was a woman named Adriana Tomaz who was giving an amulet that when she said " I am Isis", she became a heroine. Black Adam gave it to her after he fell in love with her.

She is super humanly strong and is easily capable of lifting far in excess of 100 tons, putting her on the same level as Supergirl, Power Girl, Mary Marvel, and Wonder Woman. She is also incredibly durable and cannot be harmed by physical force unless the being she is engaged with is stronger than her. She is also totally bulletproof and bladed weapons shatter against her skin. She is super-humanly fast, capable of moving at speeds past Mach 10 on Earth. She also has far superior reflexes and agility when compared to normal humans, or even other superhumans. Isis is also able to mystically fly through the air at incredible speeds and can travel across and around the planet in minutes. Like the other Marvels, Isis possesses an immense degree of superhuman intelligence, allowing her to come up with solutions to complicated problems quickly. Unlike the other Marvels, Isis' powers focus on the control of nature. She has control over water, fire, earth, air and electricity and can control the weather and the lava within the Earth. These powers are tied to her emotions. When she cried, it began to rain and when she grew angry, enormous roses crushed the buildings around her. Simply put, Isis is nature and can control its every aspect. In addition to her manipulation of natural materials, Isis possesses the power of telekinesis, allowing her to lift objects, fire blasts of telekinetic force, and to create telekinetic shields. Isis' godly energies are able to heal nearly any wound that she has been inflicted (though she has died before) with surprising speed

Lois Lane's romance with Superman is one of the most iconic parts of the Superman Legend. She has been there since Superman's debut. To not have them become a couple is an act against the very foundation of the characters. They will always be the real power couple.

This romance with Wonder Woman should only be a temporary thing. She is a character whose similarities with Superman make the romance boring and possibly damaging to her independence.

So fans of the classic couple please support it.

Accordong to people on CBR has a Mom now. And she is none other than the Amzing Lois Lane. The "you are the mom" momment will be shown in Superboy 19. Now what does this mean for Superman and Wonder Woman?

I hope this is a April Fools joke.

This what I read on DCcomics.com's Batman Bio:

What the world doesn’t know is that Bruce’s mother, Martha Wayne, was the real target for the mob hit the night that Bruce’s parents were murdered. While in the ambulance it was discovered that she was still alive, and the doctors were able to save her. She signed over guardianship of Bruce to the family butler, Alfred Pennyworth, in hopes that the young boy would be protected, and she was put into the Witness Protection Program and sent to Smallville, Kansas—a quiet town where nothing ever happens.

There Martha met and married a nice young man named Jonathan Kent. With a new inability to carry a child due to the bullet wound, Martha and Jonathan were unable to have the baby they so longed for. However, their prayers were answered when out of the sky, a rocket landed in a nearby field as the couple was driving by. There was a small baby in the rocket who they adopted and gave the name Clark Kent, and who would grow up to be Superman!

Now I hope it is a joke. It is also on the Superman Bio.

Us Viners have been debating which Wonder Woman is better Johns or Azz's. But now there is new player , Grant Morrison. His untitled Wonder Woman series is almost finished and really just needs an artist. I wonder how this will compare to Johns or Azz's. Will she be Johns overzealous warrior or Azz's family peacekeeper? Or will she be someone else? Grant was interviewed by Newsarama. This is what he had to say:

"Wonder Woman is more... unified, I think. The original idea of Wonder Woman was pretty sound. And I think the other great idea of Wonder Woman was her TV show with Lynda Carter. So I'm going to try to do something that's got all of that. As I told you, I've been working my way through the entire history of feminism, and I'm doing my research, and I'm talking to everyone, and my wife is leaning over my shoulder. So I really want to make it a particularly good book."

"It's different from Superman and Batman, because I think Wonder Woman... there have been different Wonder Womans — you know, the mod, 1960s, Wonder Woman. But we're trying to unify everything into a... I don't know if I can answer this one, Vaneta. I think this is more like All-Star Superman than how I did Batman, you know? Because I actually took a really different approach to Wonder Woman than I did with Batman, where I was combining all the ages into one man's life. And I worked it out on a 15-year timescale... when he was 25 and met Talia, and on from there. And I had all that worked out."

"But with Wonder Woman, I kind of read a bunch of stories and then ignored them all. This is like a completely new version of Wonder Woman."

I dont know about u guys but I excited for it.

Amy Adams was in Smallville

Did anyone notice that She was in Smallville season 1? Talk about foreshadowing.

Why I love the Vine

I really love Comicvine. I just love it. The wikis. The easily navigation on the site. But what I like the most the people. The people on this site who comment on this site are the best. Even if you have a diferent opinion people here still respect yours. I have been on ComicBookResources and I get attacked when I comment. Now I dont know how many of you are on CBR but I just can stand it.