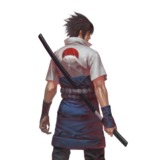 here's their story Yoko,Moe,and Amaya are the children of Sasuke and Sakura,they rebelled againts there family and left the Leaf Village becoming rogue ninjas.Now Yoko is the oldest he's male and is 19,he's awaken the Mangekyou sharingan and has learned a number of techniques,here are some of them.

sence he has the Mangekyou sharingan he has ocular powers such as susanoo,amaterasu,and tsukuyomi.

next is moe he's also a male and is 17 but unlike he's older brother he has not awaken the Mangekyou sharingan,he does have the normal sharingan and is at stage 3

he only has one chakra nature and that's wind,but like he's mother he is a healing ninja and can peforme healing jutsus.

Last but deffidently not least is Amaya,she is the youngest she's 14 but she happens to be a genius.she has already awaken her Mangekyou sharingan and her abilitys include

she only though has one chakra nature fire.

Also their all very skilled at taijutsu and are very fast.