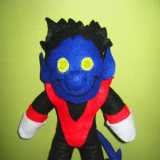 My problem isn't in regards to your views on the situation, the thing is you present your point in way that it comes off as if it's fact (I'm not saying that was your intent rather that's how it came off). It's as if you're not taking into account the possibility that Bendis just possibly just wanted to rephrase the conversation. My main point of argument is that human error where a person aims to fix what isn't broken is and can be an explainable reason as to why the dialogue changed and that these O5 who look and act like their present counterparts as young kids when they first were shown could possibly be from the main 616 timeline branch. I never mentioned that your theory is wrong or that I completely disagree with it but I do wholeheartedly disagree with the fact that we as mere viewers of someone else's story can say what is and what isn't on a characters mind definitively because in the end that is the one source we cannot openly view from.

I'm just saying that by rephrasing the conversation he created an alternate version of it, and by definition, that is true.

I don't mean to sound smug, nor do I have any idea what Bendis' plans for these characters are, but, by definition, he created an alternate version of established continuity. That's all I'm saying.

You want something in the book? Sure. Beast. Hank would not be so concerned about bringing the past characters into the present if they were an alternate timeline. He was concerned and held the gravity of the situation he did because bringing HIS past self to the present can destabilize the timeline and lead to huge problems.

Not if he brought an alternate reality version over. But his personal, 616 self.

Unless Beast doesn't realize that it was an alternate timeline, which seems to be the case. Just because all of the characters think something, doesn't make it so. Remember when they thought the Dark Phoenix was Jean? haha! she was just sleepin'! Xavier's dead again? -just kiddin!

Lol, no, the true reason is either that Bendis thought he could write better dialogue, or that he thought it needed modernizing. I believe it would have been stated by Beast that they're from another dimension after being questioned by the teachers about the integrity of the timeline upon bringing them to the present.

unless the Beast didn't realize that that's what he had done, which seems to be the case.

And this argument is still meta and not based on the occurrences from the actual text; sorry, TimeLord, you're science, in this case, is flawed.

haha! okay, look, guys, all I've done is point out what has actually been printed in actual comics; that much, as far as the story goes, is facts. If Bendis wants to back-peddle with some other explanation as to how these characters are actually the 616 versions later in the story, I will totally accept that. But until he does, he's only given me reason to believe that they are not, based on what's happened in the story.

If you guys disagree, well I guess I can't help that, but not one of you has based your arguments on what has actually happened in the story, and that would be the only way to compel me to believe that I have been in error on this subject.

I do hope there's no hard feelings.

... Gallant, the only way it is an alternate is if Bendis or editorial staff says it is. Even if he didn't intend to change dialogue, there is no Automatic canon split unless they say there was. I know, we fans like to say how things should be and would be, but at the end of the day, we're not the decision makers.

I'm not saying how it should or would be, the books I'm citing already exist.

Unless all of All-new X-men is meant to be non-canon, Bendis already made that decision by changing the dialogue; it's not as if he wouldn't have had access to the original, so he obviously made some kind of conscious decision to change it.

@DarkxSeraph: I think Hellion and Surge would be an epic pairing, given their history. Obviously you remember how they first met..

I could also dig Wolverine and Psylocke, and it's not like that one hasn't been implied in alternate futures before..

I definitely would like to see them pair Rachel with someone, if for no other reason than they haven't really touched on that side of her very much.

@poisonfleur: in the original story, the Brotherhood were the assassins in the the present, and the Sentinels were the villains in the future; I can't see that the story needs more villains than that.

I remember, Pyro, Blob, Avalanche, Mystique, and Destiny. It just seems like Magneto and Mystique are the only two confirmed villains of the past.

Even if they are the only ones, which I doubt, that sounds like more than enough to try to pull off an assassination.

I disagree to a certain extent. I think the differing dialogue with O5 Hank and Current Hank was just Bendis taking some liberties in phrasing it his way. But I do agree that it is possible that it wasn't the 616 timeline.

Basically what I'm trying to say is that although they could have been an alternate reality there is not enough evidence to completely say that this is a different reality altogether. Way I see it it's like a tree. Time is the tree, the branches of the tree represent the differing choices that create the differing realities. Now what I'm saying is that Beast could have very well gone back to the 616 past but by taking the O5 he creates a new branch of reality one where he takes them to the future and one where he does not. So yes no matter what happens to the O5 it should not affect their present selves because by the time they go back they'll be taking a completely different path. In short what I'm saying is that it is more likely what the whole situation would lead to an alternate reality in the end.

This is a great analogy, even besides the fact that it proves my point.

You could be right that Bendis didn't intend to create an alternate version of the O5, but by altering the dialogue from the Beast's rant to Cyclops before they had encountered our 616 Beast, that's actually what he has done. And maybe the different phrasing of that speech was the only difference between their world and the 616, but it was still an alternate version of the past that had already happened in the X-men #8, whether Bendis ends up acknowledging that or not.

Keep in mind, this isn't an arbitrary thing like when Rogue remembers joining the X-men in Uncanny Avengers #2; the dialogue in that scene is different from the scene that it references in UXM #171, but we can chalk that up to it being Rogue's memory of those events, emphasizing what she personally took away from the experience, and subject to her perception. All-new X-men #1 isn't doing that: it's showing us an actual moment that is actually different from the 616 version of history.

This is one of the main reasons I didn't like the idea of the O5 returning... They're using the same stories, same characters and it's just boring to read. Like I've mentioned in past posts, I would have much rather enjoyed reading about new characters, new development, not read a book that is mainly going to circulate around (not even the O5) but Jean Grey. It's a REALLY slow pace book, it's all about Jean Grey, and it's stuff we've already read before. Sure, Jean might have not been gutless like she's been at 16 but she was when she was older and used her telepathy for personal gain. It's all recycled stuff and I'm not enjoying it, and the people who are enjoying it how about you read both, Phoenix Saga and Dark Phoenix Saga for an actual GOOD BOOK not this reused, recycled crap.

I'm not about to tell you that you should like this book if you don't, that's pointless.

But I've read the Dark Phoenix Saga (several times, and I still think it's overrated), as well as most other X-men stories, but I've never read this one, and I actually am enjoying it quite a bit.

That said, if this story does turn out to be another excuse to bring back the Phoenix Force, I will drop it like a hot smegg and never look back.

@poisonfleur: in the original story, the Brotherhood were the assassins in the the present, and the Sentinels were the villains in the future; I can't see that the story needs more villains than that.

I thought Kitty did her job as instructor and a professor. The 05 have been tossed into a situation they know NOTHING about and she is teaching them the ropes and trying to get them more cohesive as a team because there is going to be inevitable battle involving them. She wants them safe, she wants them confident--so she's being the Drill Sergeant. Besides, if disliking her makes them a more unified team, she's done her job. Just like a Drill Sergeant.

Kitty learned from Logan. There are no kid gloves. She's strong and confident and is passing on things to them and making observations that may just save their lives.

In essence, again, she did her job.

And she's one of the few to be taught by Logan and Xavier, who, to my mind, was an even harsher task-master than Logan, which makes it a bit surprising that they aren't used to this. Maybe the Xavier from their timeline was a real softy.