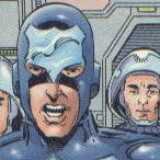 Trying to flesh out some stuff on the Comic Vine wiki.

To Quest Or Not To Quest?

Oh, these quests that have besieged Comicvine, how they torment me.  The quests are fun(mostly), and some occur naturally, others require a little legwork.  Overall I think these add to the site's appeal. So I ask fellow 'Viners: Are you questing?


I have returned with another themed submission mission.  Ben Grimm, the ever-lovin' blue-eyed Thing!  I went through all his solo titles, except Marvel Two-In-One (that's a monster of another kind, or it will leave me something to do later).  I added all the missing creators and characters to each issue.  Also all solicitations for each issue, as given by Marvel.  Added notes to each if something changed between solicitation and publication.   A side note, for the Thing: Freakshow #3 &4, Marvel's solictitation simply consisted of a picture with writer/artist credits and issue price, hence no official copy for those issues.

I'm on off and on throughout the day.  During the summer months with the kids not in school I'm on less, and my wife has had some health issues, so my time has been limited.

My words used by casualgamer.net

I had another of my questions answered by Joe Quesada on his My Cup 'O Joe awhile back, and somebody informed me it was on the C asual Gamer site...about Marvel Digital.

Okay, becuase you demanded it (or at least Aztek suggested it) I am now done with X-Factor Vol. 1 (with the x-ception of a couple small things).  This has taken longer than I had hoped, for a myriad of reasons, but I am pretty happy overall. Here a some things I did to the series...

1) All characters, teams, creator credits, even locations added (that weren't already there).

4) Added notes at bottom of summary, if something such as a story title or character changed from solicit to publication.

6) Added issue overview for nearly every issue (will add the others as I find them).

I loved this series, especially the original team.  To those that haven't read X-Factor Special: Prisoner Of Love, I highly recommend it.  Not sure what series I will tackle next, I plan on hitting some limted series and/or some story arcs.  As always I welcome any feedback, suggestions, cat calls, etc.

I have Comicvine A.D.D  Over the course of the last couple of weeks I have been primarily adding missing information from X-Factor volume 1(almost done), but I tend to get side-tracked! During this time I have added the issue overviews to the following series/one-shots that had none/only a few...100 Bullets(almost all were missing), Outsiders(2003), JLA/Avengers, JLA: Black Baptism, Jack Cross, Crossing Midnight, Darkness/Superman, 24, 100 Girls, 28 Days Later-The Aftermath, Danger Girl:Back In Black, Danger Girl: Body Shots, Dark Knight 2, Darkstalkers.  The most suprising holes were The Outsiders and 100 Bullets(this one especially given the populsrity of the series.  While I'm primarily a Marvel guy, I like to keep people guessing.  You never know where I'll show up...

Whoa!  200,000 points!  It has taken a little over 2 years to get here.  When I saw that I was approaching 200K, I felt it would be fitting that the contribution/edit that put me over correspond with the character Blue Shield.  I added a list of his chronological appearances and his involvement in each issue (almost done).  After this I will return to my work on X-Factor vol. 1.

That's right boys and girls.  Back in 1988 Marvel launched one of my all-time favorite titles, and what I feel to be the greatest anthology title ever.  MCP lasted 175 issues, each containing 4 stories/chapters, no ads, bi-monthly and 2 covers.  Sometimes the front and back covers would create a larger image when opened, others did not.  And, to my surprise last night, looking through the volume, found that none of the back covers had been uploaded.  The shock overwhelmed me, and so today I added all 175 back covers(165 today, and 10 yesterday).  There are some great covers in this series, definitely worth checking out.  Cover artists include John Romita Jr., Barry Windsor-Smith, Mike Mignola, Sam Keith, John Byrne, Charles Vess, Bryan Hitch, Walt Simonson, Rob Liefeld, Paul Gulacy, Todd McFarlane, Erik Larsen, John Busema and many more.

Yesterday, at work, Karl Kesel, who is a semi-regular customer at the store I work, came through my line.  I asked him if he had anything set to come out after upcoming Marvel Apes books;  Marvel Apes:Spider-Monkey(April), Marvel Apes: Grunt Line Special(May), Marvel Apes: Prime Eight Special(June).  Karl said, that these would be the last Marvel Apes for awhile, and the next thing after these is an All-Winners Squad comic for Marvel's 70th anniversary.  Unfortunately we were pretty busy, so I was unable to get anymore details about it. Most of the comics for the 70th anniversary have been one-shots with a reprint included, so I'm guessing that the All-Winners Squad will be as well.  I have been a big fan of Karl Kesel's work and I love the 'Golden Age/WWII' heroes, so I'm excited about this one.

Blogs Created:
30 blogs
Most Commented blog:
To Quest Or Not To Quest?
Total Comments on blogs:
125 comments