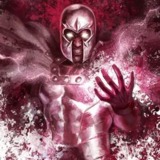 No problem friend, you have well earned the compliment. And I would love to see more of your arts ^_^

Thanks...oh you will see more from me :)

@cutter: these are pretty Awesome man !!

I'm trying to do something similar with an Apple guy for a horror comic im working on ,

So...Magneto a villain? I don't think so. An Anti-hero? 'Fraid not. Let's just call it like it is: Magneto's a HERO. There is no other way to look at what he is doing. He is doing something which might kill him...will PROBABLY kill him, but he's doing it anyway...for the sake of others...mutants and humans alike. That sort of selflessness in the face of almost certain death is pretty much the definition of heroism.

And the father-daughter reconciliation? This is Magneto at his most...HUMAN.

I have a terrible feeling about Magneto's death. And like in one of my old thread (who's going to carry Magneto's legacy) I was right...it's going to be Polaris. I think after the Magneto's book...I'm done with Marvel. Magneto no longer exists, so neither does Marvel for me.

Hi guys....it's been a while and I'm glad to be back in my fave Comic Vine site. Here I brought to you the Last Days Of Magneto: Secret Wars (and a few others)...starting in Magneto issue #18...coming in May. And here I find myself a little freaked out.

I don't even know where to begin. Boy...Marvel's plan is to change the whole Marvel Universe. First the twins Retcons and now this. Marvel Comics will lose 54 years of continuity as Earth-616 will merge with the Ultimate Universe in the latest companyline crossover. And believe it or not...Stan Lee is intrigued about the whole idea with mashing the two universes together in this crossover series. Can you imagine Miles and Peter working as a team? Honestly...I thought it was a good idea, but while this involve in the Magneto solo as well...I came to think once again that maybe...it's not a good idea for Magneto. I mean, the title tells it all "Last Days". Now...I'm not suggesting that he might die or it will be his last days or anything like that, but it can be possible that he might die during the war...which I don't think anything will stop Magneto from saving the world and his kind. Lets face it...we're talking about the Master of Magnetism. A character that won't let anything...anyone...nothing stop him. Lets hope it's not what I'm thinking, but I really don't trust Marvel anymore.

However...the situation won't end here. Everything that Magneto has done, everything that he's been through, everything he done bad, good, wrong, or right.....was all for nothing. Killing and fighting in the name of mutants was for nothing (this more likely applies to Cyclops also). Mutants will probably end as we all know it. The point is...crossover never end with a happy ending. Just like Axis didn't end as a happy ending either. I don't know about you guys, but it's seems like we are about to enter into the worst apocalyptic conclusion here. What if all this is to retcon or reboot few characters? Or maybe the majority of them (who knows)? Magneto's back story as the Holocaust survivor seems the perfect reason to describe his characterization...as the way he hated and feared humans. Changing Magneto's background won't help with his characterization and I think it will be SO unusual just to see him fighting for over nothing. Also, I heard the reason for this is not just to have some cleansing in those Universes, but to eliminate those useless characters and those that were dead might be alive somewhere...? Just rumors, but it can be true. I don;t know what else to think, but I, as a fan, I'm starting to worry about Magneto's ending book. I was hoping to see at lease 50 issues from Magneto. Because this book has so much potential and so much to tell in this story.

Here's the thing I don't get. If Bunn is writing his own book...why they don't just let him finish writing his book so then do this crazy crossover events? Axis didn't help at all and I can't hope, but fear that this Secret Wars will impact all the solo tittles. Probably cancelling them as well. If this will happen...I don't see why Magneto will need another new solo book...which is going to be about what...??? Saving Inhumans (this is me guessing)? Bunn is not saying nothing about if his Magneto's book will end after this event or if it will continue. He's been mute about the whole thing except that if his book get to end...it will be the best moment to wrap it up during this crossover events. I hope Marvel won't take this away from us fans...because it seems those good books get to be canceled. All I'm hoping is for Bunn to continue his writing...specifically Magneto.

Do you think we will get to see many cancellation starting with the solos? You think they might kill off Magneto? Do you think the whole dilemma is a good idea? Are you happy, upset, worried, disappointed with everything that's happening lately? I will leave you here with your final thoughts.

I'm afraid that no one knows. I was thinking the same thing too, but the way Marvel is turning the whole Marvel Universe...it's seems that surprises are awaiting us. All I know if Magneto ends...I will end here with Marvel.

I'm sad that I'm not collecting this one. Hopefully soon I will. I wonder what caused them to fight.

I was thinking about DOFP not too long ago and thinking I should post some comments about it and maybe images...but I didn't have time. This should be part of it...indeed. I'm glad you posted them.

Yes, pure racist and people wonder why Magneto is the way he is. Lets not mention the way he grew up, but the way humans treat mutants. I'm with Magneto all the way.

Soooo, @cutter was right from the beginning. She was born with it and she's extremely powerful. Of course.

WOW! Everything I missed (since I've been in Boston). There have been many images posted here. I'm saving them for future use...thanks everyone. I can't believe this is still alive.