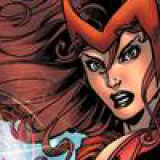 I am a huge Marvel fan, The Scarlet Witch is my favorite character. Curly Top is the nickname given to the Scarlet Witch by the Vision when they were married, she didn't like it very much, but I thought it was cute. I'm also a big Avengers fan and X-Men fan. And I probably know more about comics then most of my friends, and my parents don't really understand why I spend my money on them (not as much as they probably think I do). But I like what I like. Any who I'm also a huge fan of Cloak and Dagger, Spider Man, I'm aso very into the women from Spider Man, I love the Runaway series and also the Young Avengers, and I am patiently awaiting the return of young avengers. I'm also patiently awaiting the full return of my girl The Scarlet Witch, she pops up randomly in things but I don't really count that and I certainly don't count New Avengers #26 which I hated. I own the entire Vision and Scarlet Witch series, all 16 issues.