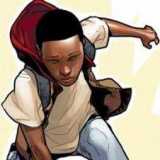 At a young age Tyson and his mother, Annabeth, were beaten by his drunken father, Jacob. At the age of 10 his mother had mysteriously disappeared and he knew his father was to blame. From then on he tried to avoid his father at all cost, but one night when he was 12 his father had woke him up while drunk and started to yell at and hit him, but he had had enough, he through a punch at his father's face, his fist seemed to get harder when it made contact with his father's face. The punch didn't bounce back though, it had went all the way through his face, completely killing him. Tyson took the 1000 dollars he found from the house, called the police, and left. He stayed ontop of a 2 story apartment building and slept. When he woke up he was at gun point. But when the mugger shot, the bullet bounced off his skin, then he beat the mugger down. Over the next week he had mastered his powers and set out to learn more ways to help himself and others. By the time he was 13 he had mastered many forms of martial arts, and had became a well known hero.

Nowadays he's going around trying to help who ever he can, or just find something to do in general.

Tyson has promise himself to do something with his life, weather its giving someone a new BFF and joining a crime fighting team or becoming a champion fighter.

No special closes, just what he can buy. But sometimes if he's going to a place he doesn't know, or if he's out crime fighting he'll were a Black and Blue outfit that heavily resembles Damian Wayne's costume expect that its Back and Blue and instead of an R it has a C

Even with his dark past he is very comical. He isn't very talkative unless he is with someone he knows. He is very willing to trust someone and likes strong friendships

Diamond Hard Skin: When things come in contact with his skin it turns hard as ( or harder than ) diamond. Blunt force cannot hurt or daze him at all, and this also makes him fire and bulletproof.

Enhanced Stats and Sences: Being an Evolved ( mutant ) he has higher than human stats and sences, bullet time reactions, and at least 3 ton strength.

Master Combatant: He is a MMA master and is able to beat the most able human and meta human fighters without his powers. He is also a master weapons fighter using his Diamond Naginata and most guns

Small Healing Factor: He can easily heal from small cuts and bullet wounds if it can break his skin.

Diamond Naginata: This is a Naginata with the blade made of pure diamond. The staff is made of normal Steel. This blade would be the equivalent of adamantium. He brings this when he knows he's gonna fight

Diamond Revolver: He sometimes carries a Revolver that shoots Diamond bullets that can go through anything. He doesn't carry it with him much anymore because it can hurt him if others can get it.

Diamond Switchblade: A standard switchblade with a diamond blade. He always carries this

Teleportation Watch: A watch that he found in a abandon lab. He found out it can take him and anyone touching it anywhere once he puts in the coordinates. He uses this to travel around to different places

If something can put out more than 15 tons of force in a sharp point than it can pierce his skin. This weapon must be very strong because most metals will just break against his skin