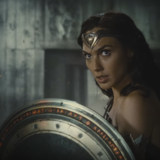 Hello, everybody! This is my first music review since Blackstar in January. That isn't to say I haven't listened to any 2016 albums since then: just that I haven't reviewed any. Which is why reviewing 24K Magic is me stepping out of my comfort zone of cinema and gaming to review something from the musical realm.

Before I begin reviewing the content of the album, I'd like to preface by saying I am not a Bruno Mars fan. He is talented, but generally refuses to push himself out of his comfort zone and create something great, which is why we've ended up with a lot of mediocre tracks like "Grenade", "The Lazy Song" and "Treasure."

With 24K Magic, Bruno Mars has set out to claim the Pop/RnB crown. Heads and shoulders above Doo-Woops and Hooligans, 24K is Bruno's best record yet. I hope Bruno gets the commercial success he deserves. But if he doesn't, I still enjoyed the album enough to be satisfied.

This album sets the perfect mood with an absolute banger as an opening track: 24K magic. I first heard this song when Mars released it as a single, and fell in love with it absolutely instantly. It was the only thing that made me excited for the album, as I'm not a Bruno Mars fan. The vocoder in the track's intro piques your interest, and Bruno Mars's vocals and synth infused production done by "Shampoo Press and Curl" will make you want to dance.

This single exists in the same album as "Versace on The Floor", a sex ballad. It's reminiscent of "If I was your man", if only slightly. But unlike that song, I don't despise Versace on The Floor. As a matter of fact, the sex-hungry and nasty lyrics sung in a falsetto by Bruno Mars make for one of the most memorable songs in the record, and certainly the most productive joint. Let's just kiss till we're naked. I can almost envision a slow dance just listening to this song.

Another excellent song on this album is "Chunky." I out of all people was worried that the best song would be the single, but "Chunky" proved me wrong. This is the best song the album has to offer. It is absolutely Michael Jackson influenced. I could hear this on Off The Wall or Thriller, and it was beautiful to hear.

The most wistful song on the record is "Too Good To Say Goodbye." As the title suggests, the album itself is too good for you to want to end. I mean, at 33 minutes length, the album is satisfying, yet leaves you craving more greatness. But boy, did Bruno do a great job in sending the album off. This song gets in your emotions. It's a very Bruno Mars song, but done a high standard. It's bittersweet in execution.

For the first time, I am recommending a Bruno Mars album. This isn't just a good RnB/soul album. It is great. It can be funky, it can be wistful. It can sound like an 8-bit song in production, or a page out of Off-The-Wall. It's beautiful keyboard notes soar, complimenting Bruno's vocals. Vocally, Bruno carried the entire album on his own. Literally. Yes, there are no features. And I can see why. Occasionally, Bruno employs additional or "backing vocals", but for all intents and purposes, this is a solo project. The only outlier on this record is "Perm.", a mixed bag, and for an album of this quality, a miss. The rest of the album is great.