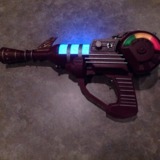 So I think I’ve finally settled in around here. I’m mostly active in the Battles section and have tried to competently represe...

I really like to debate, and I think that is the best point to introduce myself with. I especially like to debate about fictional stories and fictional characters (hence my mainly appearing in the battle forum). I haven't been on Comicvine as a registered user for a long time, but I've been spectating the battle forum for roughly two years before actually making this account. I am a writer by trade in real life, though I have no published material as I am only sixteen years old. Perhaps one day I will. I am a huge fan of the Dragon Ball franchise, One Punch Man, the Star Wars movies, DC Comics and DCEU, Marvel Comics and MCU, and RWBY. I am also a fan of other things, but I don't want to spend the whole day listing everything that interests me.