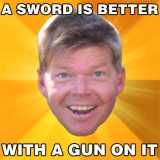 @lagozzino: When the announcement appeared I was really sad, especially since they'd recently canceled Darkness and Artifacts. With the end of Witchblade, the core top cow universe is no longer being published. That alone would not be enough for me to completely abandon the company. But when I read the commentaries of editor Matt Hawkins and others on the cancellation. I just couldn't believe it, if the series had non longer been profitable and they'd simply said that and left it at that then it might have been believable. But Matt Hawkin's comment about how heart broken he was over the cancellation of Think Tank after only a few issues and this is a similar situation raised my heckles because right now they are bringing back Think Tank with a new ongoing. I find it very difficult to believe that the flagship and most recognizable character of your company who has been steadily been published since the 1990s should be axed because it is no longer profitable but bringing back a series that barely lasted 12 issues is a sound financial decision. Really? Unless the trades after the cancellation and the 12 issues when they were coming out completely outperformed witchblade then this doesn't make sense. And all evidence doesn't support this. If Think Tank is was so profitable, why was it canceled? If the trades are so profitable, how come witchblade kept going up and past a very costly crisis event that required most of the resources of the company funneled to it? I can't imagine they would have even bothered investing in such a project if there wasn't money to be made.

It seems very unbelievable to me that a character as established as Witchblade has less of a fanbase then Think Tank when it has lasted over 180 issues. To me it just seems like Hawkins wanted to bring back his favorite pet project and need to clear out some budget. Top Cow has been shifting of late into new directions and styles of comics. Which alone is quite alright. But again the circumstances of the cancellation and the commentaries that followed to me, just leave a very bad taste in my mouth.

It doesn't help that I truly feel that the series and the other Top Cow universe titles (Artifacts and Darkness) have been really poorly handled since the last crisis event when it promised to establish and expand on a fantastic universe, which it never did. There was some very good groundwork being set up in the first issues after the crisis, but they completely ditched it afterward in a very unceremonious fashion that made it completely irrelevant.

Now that Artifacts, Darkness and Witchblade are no longer being published. That means they are no longer publishing any titles set in main the Top Cow universe. Aphrodite IX and Cyber-Force are only linked to that universe in a tenuous fashion now (to the point that you can't really count them. Given that I purchases Top cow because I loved the Top Universe, now that's it's gone there's no reason to funnel any funds to them anymore. I'll gladly purchase the last issues of Witchblade but beyond that I no longer see any point in supporting them.

As for Switch, targeting an audience that doesn't include me doesn't bother me. It just means that I won't follow it. What does is the comments by the editors that Witchblade lives on through it when it's nothing like Witchblade except in the barest superficiality. Considering Switch's premiss holds very little appeal to me as someone who has followed Witchblade since issue one. Saying a favorite series and character lives on in something that is nothing like it is pretty insulting.

The idea of punishing a company or people who only have the vaguest idea of your existence really doesn't make any sense. One person no longer purchasing a comic won't even make a bleep on any radars unless that person somehow convinced a large swat of the fanbase to do the same. Which obviously isn't the case here. Deciding to stop supporting a company that no longer caters to my interests and has at the same time ended something I enjoyed in a manner I find highly dubious will only affect myself. I did enjoy Aphrodite and Cyber-Force. But the fact of the matter is I am not rich, I have a very limited budget for comics. This means that buying Cyber-Force and Aphrodite was a choice that forced me to not purchase other series I liked and enjoyed in order to stay within my budget. I was happy to do it when at least Witchblade was still going (again it was the biggest reason I was a Top Cow fan) since it means a portion of the budget invested in this was going at least in a token fashion to a company that published what I enjoyed more (Witchblade) at the expense of handing over part of my limited budget to another company that published something I enjoyed but was less invested in (A Belgian publisher), if equally to Aphrodite and Cyberforce (my greatest investment in Top Cow was Witchblade again).

So at this point, I see zero reason to keep supporting them or returning to support them in the future. Unless they restarted Witchblade as an ongoing and it was truly phenomenal (not just good or enjoyable) my limited budget will be expended on comics and series that haven't canceled ongoings and characters in a fashion that leaves me very suspicious of the motives behind it, especially after the comments on the matter which only leave me all the more baffled. And indeed that means I see no reason to further support them in the future regardless of the consequences it may have (which will be close to zero since my own lack of further support won't change any trends just like my support likely had very little impact overall).

Hello everyone, I haven't been on the vine a lot. But I wanted to pass on some terrible news that just showed up in my feed. A very sad day, especially after how sub-par the last arc has been:http://www.comicbookresources.com/article/exclusive-witchblade-to-end-in-october-sejics-now-top-cow-exclusive

It's even doubly sad that Switch (an alternate universe where the witchblade is wielded by a teenage girl) is getting an ongoing. With this announcement. My plan is to grab the last issues made when they come out as trades. Then I am done with Top Cow. I was following Aphrodite IX and Cyber-Force but after this, I no longer wish Top Cow to get further of my money beyond what will be necessary so I get the last appearance of one of my favorite characters. If they resurrect this as an ongoing in the future. It won't matter. I'm done Top Cow, good job you've been added to the list of companies I will no longer purchase from.

This should be the perfect time for those fed up with nonsense to jump ship to companies like IDW, Image, Valiant, etc. Less headaches and great comics all around.

what a waste of time and money for everyone who hoped for good to come out of this.

It's an early issue art, likely from somewhere around issue 15

@lagozzino: Don't get me wrong, I wouldn't have kept reading the series if there wasn't enough good stuff. But before Ron Marz came along it was a mess, the arcs you pointed out are good examples. That said the Ron Marz era isn't perfect either. Nor was Seely's run.

One of the recurring problems Witchblade has is they never explore a lot of the great stuff they introduce to their full potential. I actually have another thread in this forum pointing this out after a disappointing conclusion to one of the latest arcs.

Q is a nigh omnipotent reality warper, he'd do fine.

I really enjoy the new IDW Bebop and Rocksteady, they are exactly what they are supposed to be in my eyes thugs, dumb brutish idiotic thugs given way too much power for their brains and now able to take their primitive enjoyment of violence to an uncontrollable levels. When they show up expect bloodshed, mayhem and collateral damage because that's all they are good for.

Definition of an animal-"any member of the kingdom Animalia, comprising multicellular organisms that have a well-defined shape and usually limited growth, can move voluntarily, actively acquire food and digest it internally, and have sensory and nervous systems that allow them to respond rapidly to stimuli"

Last time I checked, we fall under that category.

specifically of the great ape order.

By the scientific definition of what an animal is, we are animals that's it

meh Still doesn't change the fact they made a poor choice and could have done better.