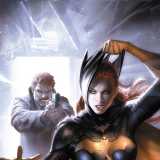 I was invited to go see the new tom cruise movie last night and declined because I can't separate tom from the character his playing. It started with war of the wolrds and has not abated yet. Valkyrie was the closet I have come to forgotteing It's tom cruise in the lead role at least for a little while maybe it was the eye patch. I explained this to my friend's and was told I was of my rocker.

Is there an actor out there you can't seem to see past the "celeb" to the role they are depicting?

Well there ever be peace?

Well there ever come a time when fans of Emma Frost/Jean Grey can talk about either of them without talking about the other woman or are they forever linked together. Is this a good thing?

Well you please pull the zippers to the top.

I understand that comics are geared toward a male audience and that female characters are drawn to capture the eye. But as of late I,m having a hard time with catwoman and black widow walking around in there catsuits with zippers down to below there breast bone. I can,t seem to suspend disbelieve that these woman would go into combat/a heist without zipping up.

Do female characters need an edge?

First let me get this out there I am a jean grey fan who has come to respect emma frost when writing well. Lately I have been going back and looking into why marvel killed jean and it seem,s to me that a lot of people seem to think that jean was a one note character and it was only with the phoenix that jean became more.

So dose this mean all female character,s need an edge a non traditional job a sordid history is the good woman behind a great man a dated concept is sue storm next on the chopping block?

O.K marvel's latest video game well have jean grey as a playable character and there are other example,s. I've wrestled with this idea that jean is good enough for video games but when asked if she could or would come back marvel get,s a little uppity. After reading and seeing some of the things said about jean and her fans clinging to the past and with the end of AvX and the fact of hope summers looking a lot like jean and hope's phoenix connection it rubs a little raw. Using jean as a game seller had me a little annoyed.

So am I just being oversensitive or do others feel that this practice is disrespecting to the character and the fan's who whould love to she her back in comics ?

Well somebody please shoot him in the head already.

Please please put a couple of Adamantium rounds in logan.s head so he can go back to the character he once was not the self righteous bastard he is now.

We have all heard that marvel now is not a reboot by now and was wondering if not a reboot maybe it's a rekindle of the marvel comic lines after the last couple years of stagnant and horrible story lines.

Thanks for putting issue numbers on the cover again.

A once agan happy fan.

How do the FF fit in the new marvel U ?

Well the avengers and x-men fought it out 3/4 of the FF sat out this event. So how dose marvels first family fit into the new universe.

How many of you find yourself fighting to finish the big 2 book,s

Was pondering this as due to my work I tend to end up with a backlog of comics so it,s not uncommon for me to have 2 or 3 books waiting at home. Lately I find it,s gotten harder and harder to sit down and read those 2 or 3 marvel or DC books and yet the indy books I can finish in no time at all. Anyone else find the same thing happing to them.

Blogs Created:
21 blogs
Most Commented blog:
Well somebody please shoot him in the head already.
Total Comments on blogs:
146 comments