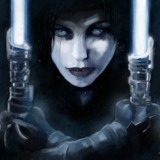 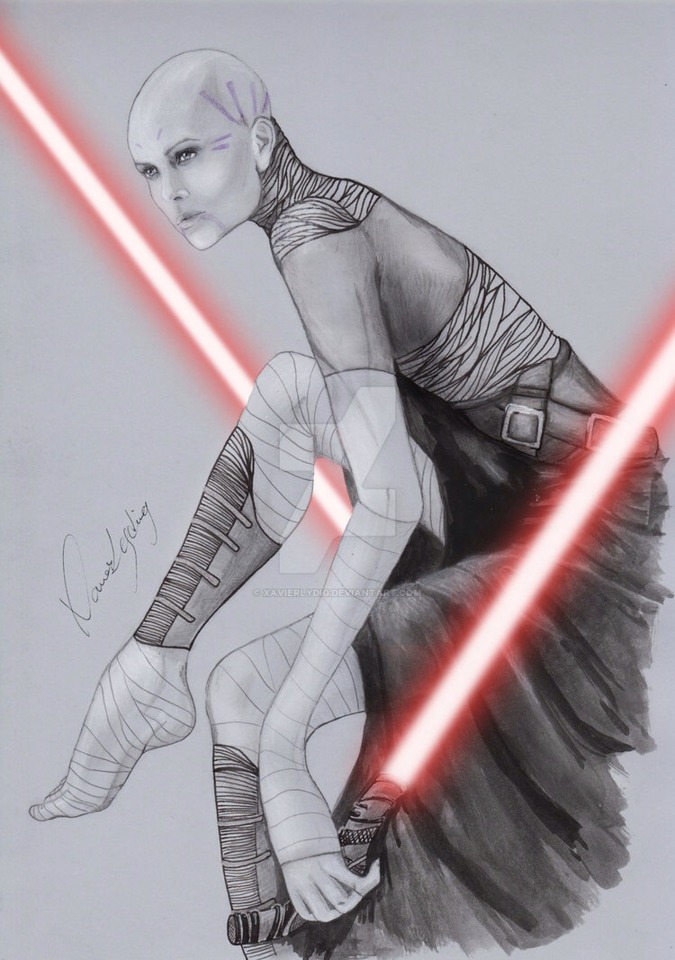 Blog in regard to Force Powers: http://www.comicvine.com/profile/coven_/blog/strength-of-the-covenforce-powers/87007/

Coven favors speed, TK, the force choke, battle meditation and telepathy above all else. While her speed isn't particularly set in stone she has been known to evade blaster fire through swift movement. Similarly she has exercised battle meditation to have an acute awareness of the surroundings and what is to come through limited precognition.

Lightsabers are a fabled and proven difficult weapon to master. Coming from what looks akin to the hilt of a sword is plasma energy focused into a blade equivalent protrusion. Being purely composed of plasma the weapon is hazardous to untrained hands. It's weight is almost nothing demanding that it truely be an extension of the body to use right. Swings can be fast or powerful with almost the same effort so it can be demanding to learn. Similarly the blade can not touch the physical body. The plasmid energy has proven difficult to counter act having often even cleaved through the rarest of metals with ease.

The order of the Covenant had fallen laid to rest by a mortal on Earth, or so Alianette would believe. However forsight of what was to come, the true heir to the title of Lady Coven simply let the fall play out. As the cathedrals of a mystic order fell Lady Coven would take only the most valiant of the order with her fleeing to the stars seeking power in its truest of forms. The order of before was week, caving in on itself in its old traditions of inferior supremacy. Desire and hate ruined any concept of unification and so grand rule was a dream that would burn. This however would not be the end of the Covenant however simply its resurrection.

Streaking across the cosmos Lady Coven races to the some of the farthest regions of the Galaxy. Artifacts of a time mostly forgot have began to take hold of the populace granting powers of myth. Perhaps they were derived of the same power as what the Covenant had used or perhaps it was a new and alien force. In either case allies and pawns laid in wait and Coven's eagerness was palatable in the very air about her. An intoxicating lust for power that had her few Covenant companions clinging to every word. In time the fair maiden fully intended to have an empire spanning across the stars. Through passion deception murder any action required would be exploited to make her fo questing vision a reality.

The scale of the ship is large, as it draws into the atmosphere of a distant world it's triangular shadow eclipses light of the lush land near by. The crew of the gargantuan craft is skeletal to any scans that can read its signatures. One might even ponder if such a craft could be even piloted so few if it even counted as a skeleton crew. Foreboding and ominous a single craft exits the mammoth of a vessel, the smaller winged craft looks almost like a bird of prey or bat swooping to the forest below. Forest shakes and animals flee as small fires begin to paint the trail of the craft along the landscape. It's landing is forceful parting trees as the thick trunks fall and branches and leaves ignight like kindling.

With the sweet smells of burning pine and a shadow like that of night a lone figure walks down the silver exiting ramp. Dark robes and lighting concealing almost the entirety of her image other then it's slim build. It had been such a long time, and was entirely new for the mysterious figure, but once again the Coven had returned to the distant worlds looking to spread her faith like a plague.