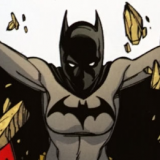 "As well as showcasing the fierce, calculating intelligence of Wayne, Affleck shows off the physicality of the Batman better than any of his predecessors, with a huge set piece near the end of the film being a magnificent showcase of this particular Batman's ferocity and brutality. Affleck's Batman is simply unafraid to just straight up hurt people, and the various ways he punches, slams, throws, stabs, and shoots enemies makes this action sequence the best Batman fight put on film yet."

Everywhere else, where reviewers honestly don't know the first thing about Batman, they can go ahead and say, "Oh, Ben Affleck wasn't too bad." But this is Comic Vine. Here, more so than anywhere else, I should hear people going up in arms over the fact that this is the most foolish and unheroic version of the character to be committed to film to date. On multiple occasions Batman breaks his two rules: He doesn't kill and he doesn't use guns. And somehow its okay with you that he does so in this film???? And that he does so in order to kill, not capture and subdue, but KILL Superman of all characters.

This is easily the worst movie adaptation of Batman ever. And for some crazy reason everyone seems to be giving it a pass.