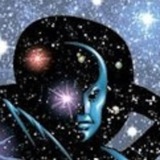 Very nice my man. I was going to suggest The Goon! That's awesome. If I may, some suggestions?

Thanks! I need to add in some descriptions on each and when i feel they make the list though......

lol, probably true, I haven't added to or updated the list in many years......maybe time to do so....

Thanks for reading and liking!

I'm pretty sure Stranger was meant to be Abstract level being. Ego may not quite be Odin level, but he no sold attacks from Celestial level beings if I remember correctly. That actually makes him too powerful for this list in my opinion.

Eh, maybe not. I honestly don't think Marvel knew what to do with him. Since his debut in the pages of X-Men back in the day, he has been portrayed vastly vague and inconsistent. It has been alluded to substantial power levels (and even the possession of a "Soul Gem" before even named Infinity Gems in the 80's. Thanos ended up stealing it though), but aside from a feature in Quasar, not much has ever been shown on his true potential (outside from confronting Adam Warlock over the Soul Gem in Marvel Team Up). The Infinity Gauntlet showing with other abstracts was....quite random at the time. I feel Marvel grouped him with other 'Cosmics' out of happenstance *(surprised they didn't include High Evolutionary for that matter).

Ego......I'll give ya. That was a stretch but felt it fell within your parameters.

If Loki really was a Transcendent tier, he would easily kill Thor by know. Apocalypse hasn't done anything impressive based on what I have seen (without amps). He got ragdolled by Unworthy Thor, and I don't see why he should be on Superman's level, even less on a tier that is like leagues above Clark.

And wait.......as far as Apocalypse? Wasn't it he whom "ragdolled" Thor in Uncanny Avengers?

I didn't really want to put Solar Man because I decided to limit this list for Marvel and DC characters only.

Full Emotional Spectrum Kyle could be on this list, but I would rather not put him here because his showing was a bit unquantifiable and he is mostly known as regular Green Lantern instead of composite.

thanks for letting me discuss your list and throwing some ideas out there. It's awesome and I totally dig it...great job!

@emperorthanos-: @cosmicallyaware1: Appreciate you sharing your thoughts on this CA1. Although I'm pretty sure Ego and the Stranger are too powerful for this list while Loki and Apocalypse are too weak.

Hey no problem. These type of lists and conversations are right up my alley so to speak. i wasn't sure about my selections....

As far as Ego and Stranger, they are higher than Surfer but below Skyfather so wasn't sure (even though Strangert is ambigious. In Infinity Gauntle he appeared with and was paired with Abstract level beings yet by showings that doesn't necessarily compute), but thought may fit your parameters.

Loki and Apocalypse too weak really? hmmm. Interesting. Thought they may come in on the bottom end.

@krleavenger:ok my man...........back to this. here are my suggestions, not entirely sure if all of them fit within your parameters (a few probably not) and would be willing to discuss the reasoning's why.....

very, very nice list homeslice. However I feel there are a few missing. May I add my two cents in if you don't mind?