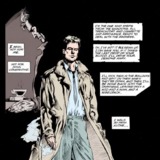 @koop: In my opinion last couple of months their comics just fall flat.

I really liked Moon Knight it had great coloring, even better pencils and interesting story.

I was a big fan of Amazing Spider man but i just don't like this new Peter P.
Nova started off ok but i lost interest, same with Spider-man (Miles).
I hope they don't mess up new Vision comic which I think is very interesting.

I will say this though, whatever Kylo Ren is trying to finish, it wasn't started by Vader.

Well no, it wasn't, but he was frontman, a boogeyman, while emperor operated from the shadow.
He was synonym for fear amongst the people in Galactic Empire era.
I know some people will disagree but that's my point of view and I think it explains Kylo Rens speach.

@gustavoburciaga1: You my friend are correct, I read it but totally forgot that part.

Is he smoking a cigarette?

@allstarsuperman: Let me start by saying I'm a huge fan of old Mad Max triology and i really think that Mad Max was never about the story or storytelling. In my opinion it was more about that postapocalyptic atmosphere that had it's charms (especially from G.M.s imagination) and degradation of humanity . I'm not saying plots and stories were bad I'm just saying I think they weren't the core of movies.

I like to think about this new Mad Max like it's some kind of postapocalyptic opera :)
But then again this review is not about Mad Max and those are just my opinions... and I like to babble (a lot).

I'm just not quite sure exactly where the movie sits with me but I'm determined to find out.

I had the same feeling about the movie.

Idea is good, it sends a message which is great, I love those kind of movies.

It is not perfect and it is deffinitely not for everyone but in the end of the day it deserves a chance.

It's just I kept wondering who exactly the movie was being geared towards with the different layers and elements.

I would say it's aimed for younger viewers and those older viewers that kept that inner child within them, you know which one I'm talking about, he's the little guy in you that says you can change the world for the better in one way or another (by smaller things or bigger, everything counts).

it could get a little intense for the younger viewers, especially when innocent people start getting zapped into nothingness by the pursuers.

I think a lot of movies aimed for the younger ones have these kind of elements now, I'm not saying it's a good thing but it's nothing new per se.

Out of all the tie ins this has been my fav. Can't wait to see how it ends

I loved chemistry between them.
Capullo is one of my favourite comic artists so I can't wait to see what his new work will be.

I really hope Scott and He team up again on Batman, actually it doesn't matter on what, I just want to see them team up again so it is great they confirmed that. :D