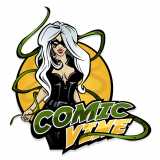 One of the constant themes in Catwoman's ongoing series has been that she is reckless. This is something we saw in the first issue and throughout the start of the series, and it's her irresponsibility and recklessness that got her dearest friend killed so early on. It's nice to see that Selina has brought on a new character into the fold specifically to ensure that she keeps it all together and stays responsible. It's nice to see Winick address the fact that this is a reckless, young character and it's good to see him dealing with that in a way. However, I think I would prefer seeing her learn from her mistakes and grow as a character independently without having to be under the watchful eye of Gwen Altamont.

The seventh issue of CATWOMAN has great pacing. The story moves along very smoothly and logically. It opens with humor, introduces a new character and draws a relationship between this new character and Catwoman. By the end of the issue the book references Selina's previous encounter with one of Gotham's finest. Overall, it was consistent. The issue brings artist Adriana Melo on board for pencils which unfortunately didn't really blow me away but were consistent overall.

I fear I am gradually losing interest in this series, which makes me very sad considering I have such an affinity for the central character. The plot is gradually deviating from the events in the first issues and it no longer feels cohesive with what we saw initially. Basically, this doesn't even feel like the same book.

My primary qualm with this series is that it feels as though Selina hasn't learned anything at all from her mistakes so far. She knows she is reckless and admits to her recklessness, but she hasn't been proactive about playing smarter. Her inability to learn from her mistakes and to continue to feel remorse for her friend's death (which was her fault, no matter how you try to spin it) makes her look stupid. If this person was so influential and so prominent in her life, then the loss of her friend should reflect that fact. It's just disappointing that seven issues in and she can't seem to keep herself in check. I feel this has the potential to be a smart book with a smart character, but she just strikes me as a little bit childish. I'm hoping to see more character development.

In this issue we are introduced to Spark, and unfortunately I was not impressed with his first appearance. I'll hold out to see if he becomes more interesting, but so far reading this issue I was not too impressed.

Like I said, this book has the potential to be great if Selina was just written like the smart, savvy, clever character she has the potential to be. Instead, we have a character who doesn't take account into her actions, is too reckless, and has no consideration for the lives of other people who are putting themselves on the line to help her. Additionally, at the start of this series we saw a lot of emotional development. We learned that Selina was actually a very broken character, but this isn't something we have seen touched upon in the last couple of issues. I'm hoping that Selina can learn to take better care of herself and starts playing smarter. An entire issue of Catwoman stealing fast cars wasn't all that interesting.

John Carter from Disney opens from Disney in theaters this weekend. As a character in the public domain, we've been seeing different attempts at exposing the character to today's generation. Both Marvel and Dynamite Entertainment currently have comic series based on the characters and now Disney is hoping to build their next action-packed franchise out of it.

We watched the movie in glorious IMAX 3D and are now ready to let you know what we thought.

First of all, here's our quick first impression:

Now we'll each take a turn to go a little more in depth.

The best part about going into a movie with relatively low expectations is being proven wrong and actually enjoying the film. This is exactly what happened with John Carter, which far exceeded my expectations. Disney's latest film is sure to be considered an epic. Everything about this film is huge. The characters are big, bold and entertaining and the story will transport you to Edgar Rice Burroughs' mythical Mars.

The story opens in the present and transports the viewer 13 years into the past where John Carter, played by actor Taylor Kitsch, is searching for gold. What he finds instead is a an amulet that transports him millions of miles away from Earth and onto Mars. The pacing of the story is perfect. At the beginning we watch as John Carter adjusts to being in a completely different atmosphere. Mars is unlike Earth and here, Carter is given incredible powers. We are then introduced to some of the supporting characters that will play a pivotal role in the remainder of the film. The supporting characters are what really brings this film to life. It is really easy to find yourself enamored with characters like Sola, Tar-Tarkas and Woola; the lizard-dog.

There was a lot I really enjoyed about the film. The interpretation of Dejah Thoris was fantastic. She's smart, savvy, proud and she refuses to play the role of damsel in distress. She's a fully capable woman and I liked how Carter found himself attracted to these particular character qualities. The interaction between the two characters is fun, entertaining and believable.

Overall this is a great story with interesting characters and the acting is good enough that you will feel like they are on Mars. Sure the film had it's flaws. The ending was rather predictable, but if you don't think too much about it, enjoy the character interactions and can appreciate the cinematography then you will not be disappointed by this film.

There's nothing better than going into a movie with minimal expectations. Taylor Kitsch's name has been a bane to comic book movie fans since his performance in X-Men Origins: Wolverine. Having recently re-watched that movie (don't ask me why), Kitsch's performance is the least of that movie's problems. I also watched the entire Friday Night Lights series and Kitsch, while didn't have a crucial role in the series, was an extremely likable character. And that's what we get in John Carter.

Having read only a handful of random WARLORD OF MARS issues, I had a passing idea what the premise of the movie would be. Carter was a Confederate soldier that gets transported to Mars and takes part in a bunch of battles. The movie offered much more than that.

Arriving at the theater, I was a little concerned in seeing in in IMAX 3D. But the design of the glasses allowed you to see the entire screen and the effects are impressive. The movie is very ambitious in delivering several locals. We begin in the late 1800s, see some flashbacks and then journey to Mars. At some points I was wondering who exactly this movie was made for since it almost felt like there was something for everyone.

Kitsch and Lynn Collins (as Dejah Thoris) do a great job in the roles they are given. I was surprised that I somehow had no idea Mark Strong, Dominic West and other notable actors were also in the movie. Needless to say, it was a nice surprise. Which goes back to Disney's marketing for the movie. I had only seen a couple trailers. Perhaps I don't watch enough television because I haven't seen very much press for the movie and up until last week, I wasn't exactly sure when it was even being released.

The movie is not perfect. It's not supposed to be. It's about a guy that goes to Mars, fights alongside a beautiful princess while plenty of aliens are also running around. There's an odd mixture between the old time period, the simple/savage nature of the planet while we also get some heavy duty sci-fi elements. As I mentioned, there's something for everyone.

The story's pacing does have its ups and downs. We don't start out immediately on Mars, but that's a good thing. We see a little of what makes Carter tick but who he is and why he's turned his back on everything becomes clear throughout the film. The ending becomes a little predictable but what can you expect. It's not a horrible ending. It fulfills what the movie needs and there is the possibility we could see more of Barsoom.

Based on my first impression, I gave the movie a 4, rounding the score up. I wasn't expecting a whole lot but I was pleasantly entertained. Kitsch does a great job in the role and there is plenty of action and special effects to keep your eyes glued to the screen. Die hard fans might feel a little different but if you're looking for a fun movie with action, adventure and humor, and aren't necessarily looking for a masterpiece, you should be happy with this movie. I applaud Andrew Stanton in his first live action directorial debut.

Nothing more fun than opening mail!

Thanks comicvine for being so damned awesome....

The comicbook site I always waited for....

Octagon Freak said: When I say "Comicvine" who on here do you think of? My boss. [more]