The Punisher vs Solo Round 1:
No prep
Morals off
Bloodlust on
New York City
Unpopulated
Cap has shield

Round 3:
Cap has shield
Morals on for all
Spider-Man has no spider-sense
5 Comments

How Will The New Rebooted Movie Superman Be Like?

Well, Superman has had many different portrayals. Right from the very beginning in the 30s, he wasn't so nice. He actually was a violent man who beat on wife-beaters, and didn't have a strong moral code. 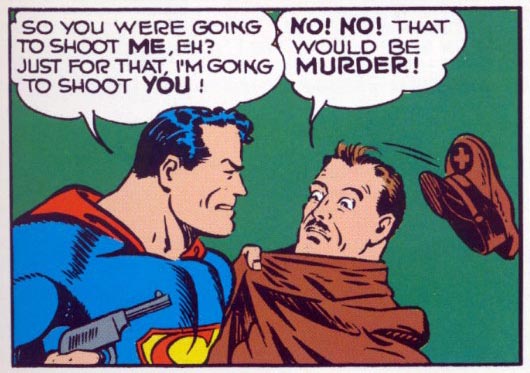 See, he isn't so nice. He was intimidating and at times, scary. Though he didn't kill this guy, he shot him and then raced towards him and caught the bullet, so he felt pity and saved him. But if you read a Superman Comic, or watch a Superman film or cartoon, he is nothing like that. Though of course Kal-L became nicer.

As time went buy Superman became one of America's best heroes, a light-hearted symbol of hope. This came about towards the end of the Golden Age and onwards through-out the Silver Age. 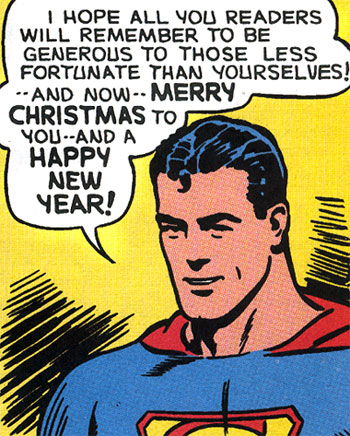 Well, this is what Superman's all about, being nice, friendly, but also looking for the better world. Teaching others to be good, being a role-model, but will this be used?

Superman can also be a guy who just wants peace, and goes to extreme lengths to get peace. But Superman can't have everything I guess.

And theirs KC Superman, who took a much darker tone to his job as Superman. Not as dark as the early Kal-L, but not happy or hopeful. He gave that up, after his wife died, he gave up hope. But after Wonder Woman encouraged him, he came back and changed the world, though the world gave him horrors he could not face. Though in the end, he ended up with Wonder Woman, was gonna have a kid, was with his friend Batman, and was going to lead a good life. In the end, he re-gained hope.

Or will he just be like Pre-Flashpoint Superman, the typical, hopeful Superman, which to me will be dull.

Will Superman be more for the world in this new movie, like in the movies he saves America or Metropolis in the end. In the movies, he ends up saving just Metropilis, or America, and I think sometimes the world. But will we see him save the world in other countries, China, Japan, etc?

Or will he just be a complete a$$? Haha.

In the end, Henry has a job. He's gotta be Superman, and god I hope he does it right.

Ok. E2 Superman in his Prime is probably a bit above E1 Supergirl, so in Crisis On Infinite Earths he spanked and kicked the crap out of a weakened Anti Monitor, in his final form, yes he was weakened. After he KO'd E1 Superman to go and fight it.

So how weak would Galactus have to be to lose to E2 Superman?
Morals on.
Galactus can't deny anyone from existence.
In space.
No prep.
14 Comments

Morals off
In the 616 Universe in Chicago
No prep
No knowledge on the other opponent
R1 - Green Ultimate Hulk.
R2 - Grey Ultimate Hulk.
Who wins?
30 Comments