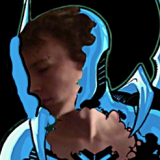 Well it's been a good run but the duo of Dick Grayson and Damain Wayne will soon be coming to an end.  They faced some hardships in their relationship, with Damian even trying to kill Dick at one point. But even though they had their bad moments, such as Damain threatening that he'll find a teacher that "he can respect" they were certainly a great duo, and one that I have looked forward to with each issue.

To be honest, I'm a little disappointed that with this new 52 DC is going to do later this summer, we won't see anymore Dick and Damian adventures. They had such a love hate relationship, at least Damain did with Dick, but their adventures were great from the get go, especially with Grant Morrrison manning the helm at the beginning of the series.  Dick was trying his best to take on the role of Batman while dealing with a violent, temperamental ten year old. He really was going through some hard times. People didn't think of him as Batman, especially Jason Todd, who constantly mocked him.

Like I said, Dick and Damain's relationship has been a rocky one, but one that I very much enjoyed reading. Now that Batman and Robin will be a father/son duo, it doesn't quite feel the same to me. I can't place my hand on it, but I feel like with Bruce becoming Batman again, the Dynamic Duo will seem off.  Either Bruce will be really harsh on Damian, being able to put him in his place, something Dick hasn't been able to do (from what I've been reading), or he'll let Damain do as he pleases. I just get the vibe that this new father son duo won't be as good as the duo of Dick and Damian. Don't get me wrong, I'm sure the writer(s) and artist will be able to deliver an action packed adventure with the two, but nothing like what we have come to know.

So I have mixed feeling about Bruce returning to his role as Batman. Dick wasn't nearly as good as Bruce was in the role, but he tried, and to a certain extent he succeeded. Dick's relationship with Damain is a good one and I really hope to see some Nightwing/Robin team ups in the future. Let me know your thoughts on Bruce returning to the role of Batman and how you think it'll effect the Dynamic Duo.