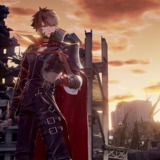 Vein isn't a human anymore as such he is a Revenant a being similar to a Vampire from mythology as such his powers are based in blood and they are called Gifts.

Vein is able to use blood that he has took from his enemies or in extreme cases blood that sustains him to attack or amp himself in a variety of ways as Vein is already capable of being faster then bullets if he amps himself he can move as fast as lighting, he can also amp himself to strike harder or form a Blood shield around him.

The bloodshield protects him from all manner of attacks however repeated attacks will break it, he typically uses this to form a strategy as for the attack gifts are as follows.

Volatile Blood Geyser: Vein uses his toxic Blood to form a Geyser under his opponent with very little notice the Geyser will then propel the opponent into the air in an attempt to dissolve there very presence similar to acid.

Heavy Blood bullets: Bullets of blood that betray it's name rather looking like Bullets they appear to be blasts, however unlike blasts they will pierce through anything that are in its path no exceptions downside they have only medium range.

More Gifts to be revealed and listed later

Other powers not strictly "Gift" related

Vein is immortal in the sense his body can't be removed from existence or erased meaning his body is immune to Atomization and the like however it will still kill him he just won't disappear he will get back up in about 30 minutes aswell as Stabbing or cutting him apart it will be healed.

Vein has a healing factor however it only truly kicks in when he dies otherwise in battle he can heal Damage done to him by striking the opponent with his weapons or drinking some blood.

Eyes of the Revenant

Vein's eyes allow him to adapt to any speed aslong as he has an ample blood supply to adapt to it however he will not remain at the speed after the battle is over this way he is able to adapt to anyone's speed and with enough blood he can prevent a blitz, his eyes also allow him to see far further then human eyes and most superhuman eyes.

Vein possesses enough Strength to throw giant mecha and cars, if he amps himself with more blood he can pick up skyscraper's but only bat something with them this requires quite alot of blood to do.

Vein Can dance around bullets if he amp's himself with more blood he can move as fast as lightning, otherwise if someone is capable of moving faster then him he can adapt to their speed if he has enough extra blood.

Vein is able to see mostly any bullet in slow motion and spells and the like, due to his eyes he can nearly dodge anything.

Vein is immune to time magic or time manipulation it does not effect him in anyway perhaps from not being originally from this reality.

Vein can buff a partner or party he is currently in with his gifts allowing them to somewhat share his power for a period of time 20 to 30 seconds usually could be shorter if he buffs a whole party then it's about 15 seconds.

A state of being Vein will rarely enter if he is near death and exhausted, his body will move purely on instinct like being on autopilot but extremely primal in nature while adapting to the speed and strength of an opponent making him attack faster and stronger with each blow and making him very hard to hit in this state, Signs of this state activating is when a Red aura overlaps a blue aura and his eyes will gain the color of silver pupil will be black with a red outline this state will stay active till he either gets completely overwhelmed or when the battle is over in which case he will be KO'd for up to an hour.

Important notes about the state:

A power unknown to Vein on the subconscious level only by being at his max bloodthirst will this EVER be used.

Vein is a prodigy on the battlefield able to formulate plans most would never dream of doing making Vein a MVP in a team or a one man army at times.

Vein has mastered all the weaponry from his world.

Vein can adapt very quickly to learn magic of the current world he is in or the science of it aswell as it's weaponry.

Vein has a much higher knowledge threshold opposed to other humans and metas.

Unorthodox mastery of Hand to hand

The Revenant longsword: is made from material from Vein's world it is indestructible and sharp enough to cut through Vibranium and other metal aswell as feeding vein blood upon each successful attack,the sword can only be wielded by Vein same for the rest of the Revenant weaponry.

The Revenant greatsword: is made from the same material but more heavy and strike alot harder then the longsword it also gives him blood upon each successful attack aswell as being able to shatter Vibranium.

The Revenant rifle: a rifle made from the same material as the other revenant weapons more versatile as it can cut with the bayonet aswell as fire rounds that pierce most material however it does not give him blood per each successful attack.

The Revenant axe: made from the same material as the Other Revenant weapons it swings abit faster then the greatsword but still slower then the longsword abit more heavy so it doesn't take as much strength to cleave stuff asunder gives Vein a large amount of blood upon each successful hit.

The Revenant Hammer: Slowest most devastating weapon at Vein's disposal though he will rarely use it because it will put him at a disadvantage capable of smashing practically anything and indestructible however it does not yield blood to him like the rifle.

The Bloodveil: vein's gauntlet that is connected to his rebreather mask, the gauntlet turns into a claw in which either impales or claws the target and drains them of alot of their blood that immediately travels to Vein's rebreather mask allowing him to instantly drink the blood he just took from the target in large quantity this satiates his bloodthirst for abit aswell as making his eyes glow bright red, the rebreather protects Vein from radiation or gas filled areas that could harm him aswell as allowing him to instantly drink blood he typically uses it off and on in battle.

Backstory: little is known about Vein other then he was saved from a post apocalyptic reality by a "Stranger" the apocalypse happened when thorns of judgement sprouted from within the earth and pierced all around the planet turning the world into an apocalypse as the humans either became Revenants (vampire like beings that have vampire fangs but also a bio organic arm gauntlet or Limbs the bloodveil) or the Lost (beings that are bloodstarved and look more ghastly akin to monsters or demons) Vein was offered an opportunity by the "Stranger" who came from another dimension to escape the nightmare though Vein is a blank slate as a Revenant he lost all his memories and constantly thirsts for blood the only memory he remembers now is the "stranger" giving him opportunity (Little known to Vein he was the first Revenant and the one who brought about the worlds end upon awakening as it, the way he awakened is unknown)

Personality: Calm,serious,sadistic (If he is bloodstarved) angry or righteously angry,Quiet, friendly for the most part (However he is very reluctant to approach or talk with anyone, he himself senses something is wrong with him and warns people to keep away, it's also very hard for him to fully trust someone due to the circumstances of his world's state he is extremely wary of anyone believing he might be attacked at anytime)

Likes&Dislikes: Vein is a blank slate so he will come to like and dislike whatever or whomever.

Can become bloodstarved enough that he will become somewhat primal and unpredictable.