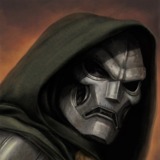 USS Enterprise a Constitution class heavy cruiser for the United Federation of Planets vs The colonial Battlestar Galactica. I know this technically not comic related but it's a form of fiction I'm interested on. That being said I've seen this on other sights but wanted to give my opinion on the topic.

Note: I'm a fan of both franchises so I will not be biased to either side.

Although the size might fool you the Enterprise can pack quite a powerful punch:

Photons: Photon Torpedoes are a shielded warhead, inside having a Anti-Matter Matter reaction, which is then shot at an enemy target.

Battlestar Galactica is considered to be a heavily armed battleship. It uses Kinetic energy guns, conventional missiles, and Nuclear Missiles.

Kinetic Energy guns: kinetic energy weapon[1] is a weapon that causes damage as a result of the kinetic energy (motion) imparted to a projectile. (http://en.battlestarwiki.org/wiki/KEW)

Conventional Missiles: used less then Kinetic Energy weapons, these weapons are armed with a powerful warhead that can be launched out of one of Galactica's missile tubes.

Nuclear Missiles: Galactica has been stated to have at least 5 Nuclear warheads on board. We have also seen the weapon used as a primary Cylon weapon. The weapons are fired through the same missile tubes as the conventional missiles.

Now that you know about their weapons let's compare:

Photons vs Missiles: Although similar in someways Photons are the clear winner. Photons move much faster and armed with a much more powerful warhead then Galactica's missiles. Also remember Nuclear weapons are no where near as powerful in space than on land.

Phasers vs Kinetic Energy weapons: Enterprise's weapons win again as Phasers again fire faster and are a pure energy beam. A beam of solid energy vs a more powerful and faster battleship shell is one way to look at it.

Round 2 -Marines and Security

Security Guards: Aboard Enterprise we see the "Red shirts" or the security (have been rarely mentioned as starfleet marines) aboard often accompanying officers, or beamed down on landing party missions. They are usually armed with type 2 phaser hand held weapons.

Battlestar Galactica Marines: Galactica's Marines protect against enemy boarders, board enemy ships, act as ship security, engage in rescue missions and hostage situations, assist in planetary operations, and protect against mutiny on and off the ship. They armed with Rifles, pistols, and equipped with battle armor.

This was a difficult decision as Galactica has about: 100-150+ Marines and the Enterprise having around 84 security. Both have received fairly extensive shooting and hand to hand training, and around the same mobility. The Enterprise's security (again or marines) seen to have no protection and can easily be shot in vital areas by Galactica's marines who are very good marksman. On the other hand Enterprise's security have phasers which can stun kill or vaporize an enemy without having to hit a vital area. In the end I'm going to give to Galactica because of their stealth and shier numbers.

Enterprise: The enterprise has advanced shield technology that can with stand many different attacks such as: Photon torpedoes, phasers, distruptors, and plasma torpedoes. Add to that it has a outer hull made of tritanium, a substantance stat ed to be 21.4 times as hard as diamond. The enterprise also has defensive phasers.

Galactica: Galactica has several meters of armor plated hull that has withstood Conventional and Nuclear (again not as strong in space) missiles. It also has hundreds of point defence cannons that create a Flak field in front of galactica. These however usually only seeking weapons or fighters.

I think the clear victor is Enterprise. It has powerful shields and stronger hull than Galactica.

Round 4 -Warp drive vs. FTL drive

Galactica on the other hand uses a jump drive delivering a faster than light jump to a given location.

This is close but I'm giving it to the Enterprise. Warp drive is faster and seems less random then FTL jumps. I know Galactica can punch in coordinance on where it wants to go but they usually jump to a random sector in space.

Round 5 -Battle speed and propulsion:

Enterprise: Enterprise uses an impulse engine on the back of the saucer. At full impulse power the Enterprise nears the speed of light.

The Enterprise has another victory. The Galactica is slow and relies on its fast vipers to closely engage enemy ships. The enterprise on the other hand has great combat speed and maneuverability being a smaller ship.

Round 6 -Sensors vs Dradis

The Enterprise's sensors can detect objects at very long range such as planets, ships, asteroids, etc.

Galactica's Dradis system acts like a modern day radar picking up on an objects motion.

The Enterprise has another victory due to the ability to distinctively classify types of ships and give specific information at a much longer range, rather just detecting ships.

Vipers: Galctica's vipers are fast starfigters that engage other fighters and sometimes capital ships. In total Galactical has around 120 vipers but only 80 launch tubes. Galctica has two types the MkII and the MarkVII. Vipers are equipped with small kinetic energy weapons and sometimes missiles.

It sadness me to say this as I am a huge viper fan, but I do not believe their weapons are strong enough to damage Enterprise. I doubt they can even damage her shield's at all, while in return the Enterprise makes short work of them with her phasers.

Visibility: Unlike the Galactica the Enterprise can see in a screen that sits on the bridge.

This gives the Captain (Kirk) a 3-dimensional view of space around him making command decisions easier to visualize.