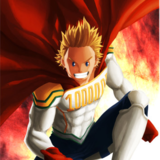 "Glory lies beyond the Horizon, Challenge it because it is unreachable. Speak of conquest and demonstrate it"

I've seen a lot of controversy within the RWBY community about who's stronger than the other and so I decided to make a thread dedicated to solving these issues, This thread "Just as what the title says" will be taking RWBY characters and each give them a respectful rank in the Tiering list.

With this being said let's begin

Grading Scale (NOTE: = - Equal, =/> - Both equal, though one is slightly above the other or is still debatable)

Leave your thoughts below about this list, If there's anything that you think is out of place please do let me now, and If you have any other character recommendations for this list leave them down below (Note: I'll be adding teams to this list soon, Just not sure where to rank them and I'd prefer discussing that with you guys)

Please do give your own list on this subject.

With all of this being said

Now throughout all of comics, anime and other forms of media we see characters like Silver Surfer, Superman, Goku and Toriko preform extraordinary feats within all these categories. Though throughout all of the vine I see people getting themselves confused with them and mistake feats for something they are not.

Within this thread I'll be going over a solid theory (If not Fact), which consists of different types of Strength, Speed and Durability which I'll list below.

You viners can have a look at them and leave your thoughts below, here they are.

Lifting Strength: One capable of carrying or holding up a specific amount of weight.

Travel Speed: Traveling from point A to point B, Someone capable of moving at extremely fast speeds to different places.

Combat Speed:One capable of moving there muscles much faster than ordinary human's, Capable of throwing punches, kicks as well as fight opponents at extremely fast speeds.

Physical Durability: A character that is capable of tanking physical damage such as punches, kicks and headbutts.

Energy Durability: One capable of withstanding massive energy damage, such as explosives and energy attacks/lasers.

Piercing Durability: A character that can withstand attacks from bladed weapons for example, Swords, katanna's and shurikins

Thoughts on this, Do you guys agree with these different types of strength's and speeds, If not I would like to hear your thoughts on this as many people seem to confuse themselves with this.

P.S - Some of you may be aware that I made this thread a while ago but I decided to remake it as a apart of my blog.

This will be my Top 5 Marvel Cinematic Universe Characters as off now and with that said let's get started, After watching Infinity war gave me the idea to make my own list of characters.

G-D of mischief, Son of Odin and imo one of my favorite MCU Villains what's not to like about him. His character growth throughout the universe especially with his Brother.

He's a manipulator, get's into peoples heads and plays them for fools (though unintentionally makes himself one lol) he's funny as hell.

G-D of thunder, Son of Odin and prince of Asgard, protector of the nine realms and wielder of what's possibly one of the most badass weapons to ever exist Mjolnir.

Starting off from what seemed to be an irresponsible, foolish warrior develops compassion and learns from his mistakes and grows throughout the franchise.

Steve Rogers a simple man who grew up in the 1940s in Brooklyn and was a helpless person who suffered from numerous diseases, Volunteering for a SSP that turned out sucessful became the next revolutionary superhero and possibly the greatest off all time.

His true shine (at least imo) in The Winter Soldier, where we get to see a darker side of the character, character interactions, depth and themes. Ideals clashing with modern society, a War Soldier up aganist the whole world, a man against G-ds and comes out on top.

Earns my spot as number 3.

This is my favorite Spider-Man, different from the other times we've seen him either serious or near perfect we are given one that is like the opposite, A kid who's maturing and growing to be something greater.

His optimism always shines makes his way on number 4.

Doctor Stephen Strange, A hard working wealthy business man who suffered severe injures, lost everything and was forced to venture out to the mystical world and finds something beyond the one dimension world.

Imo, one of the most badass Superhero's introduced into the mcu, his calm like charm, intelligence and sherlock like personality combining mystical forces offers one interesting character.

He wins his fights through brain, wits and magic something that we don't see often in most action films, Would love to see more off him in the future.

I like these characters and some I think in my mind could've made it on the list, was close but didn't quiet make it still cool characters.

This was a difficult list to make, a lot of characters from the MCU are likable and entertaining but I do believe this would be my rough list of top 5 MCU Characters, things may change in the future.