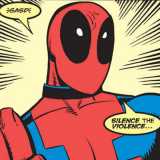 There are so many characters in comics, who are and always were in their prime and you know that they won't get past that. Wolverine is such an example I think. We know that he got older, but he was always Wolverine as we know him. The same applies for Batman, even though he had his Year One stories. Captain America is another example, then there is also Bruce Banner / Hulk and so on. The same applies for villains. Look at Catwoman, Green Goblin, Mr. Freeze and many others.

Who are the characters, who clearly got older in comics and reached their prime, while we were able to witness all of it?

I would say Spider-Man, who gained his powers, when he was 15 and now he is much older. Also Nightwing, Red Hood and Red Robin. But Red Robin didn't make the same jump as the two others. I think that Damian will always stay a little kid.

Greg Land at his finest =)

Go here and do the test: http://10fastfingers.com/typing-test/english

Try to outrace me!

Ah shock me, I wanted to post this in the off topic forum and not the battle forum. Can a mod move it please?

he has been plenty strong enough in the past even as professor hulk he can match strength with either of them.

That planet pulling feat is not legit. We have seen Superman pulling the entire planet all by himself and even more weight. Then the Martian Manhunter was also there. And then he had Wonder Woman. I wouldn't argue if a writer gave her a feat, where he pulled a planet all by herself, but I don't think that you can use the Earth pulling feat as a great showing for her strength, because it doesn't mean that she was pulling 1/3 of the weight. What if she was only pulling 150 billion tons? Something the Hulk has done all by himself and it was not a simple pulling of the weight, but lifting it for many hours. We also saw Hulk fighting through rays, which were capable of sending the Earth out of its orbit and these rays needed to be increased to restrain the Hulk, but he still managed to overpower them with sheer strength. And he has even more strength showings like punching through the time stream, through force fields, which were so strong that only Black Bolts voice would have been a threat to them and then we also have Hulk absorbing the same amount of damage. That guy literally withstood attacks from Galactus himself. I still see Wonder Woman beating him, due to her speed advantage, but if the Hulk grabs her once, she is done. And the same applies for Black Adam. People in this thread are massivly underestimating the strength and durability of Hulk and Thor-2. Unfortunately some of them are massivly overestimating the speed and reaction times of Hulk and Thor-2.

@floopay: Same, and he has been back for 3 issues now, although he looks and feels very different. This is Sentry resurrected from mere atoms using the celestial death seed, regrown and burnt repeatedly so the Void aspect of him leaves his head, and made more powerful with the Celestial seed. He look more scary than his normal self as well.

Judging by the dialogue in the book Sentry healed back from an atom and was left by the Void without the influence of the death seed. He said that the two angels came to him later on and pulling him out of the sun. Or was it somewhere stated that the death seed was used on him before that? If so, then I totally missed that in the book.

Its gotta be about sentry. He always talks about staying vigilant.

I think that the Sentry would make quite a lot of sense and I also searched for few scans to back the claims up!

But why would they create a teaser for all of it? For now it looks like he is already a part of the Uncanny Avengers book and he'll probably stay in that book for many more months to come. Sentrys dialogue in the last two UA issues was intriguing and being vigilant would make a lot of sense, but I don't see what Marvel could announce for the Sentry to keep an eye on it .What do you think? @killemall

Neither Superman, nor Wonder Woman are in the slightest near to World Breaker Hulks level. Not the pre 52 versions and especially not the new 52 versions. Superman had to fly at speed of light, or at least near to it in order to bust a moon and that knocked him out, while World Breaker Hulk casually jumped, collided with Red She-Hulk and that destroyed the planet they were walking on. The passive damage World Breaker Hulk spreads around, when he throws punches is insane and not in the slightest comparable to what Superman does, who is limited to mountain busting as stated by the narration and also by himself. Yes, the DC heroes have the natural speed advantage, but I don't see any of them being able to deal enough damage to actually do anything to someone like World Breaker Hulk, who not only has the strength but also the natural healing factor, which is at that rate incomprehensible.

Come on now, you're being a tad unreasonable by amping WWH to the level where he solos a team like the Justice League. Superman's punches can shake the Earth and has survived a backhand to the moon by a more powerful being than WWH, Wonder Woman is a demi god and has proven herself a top tier character, particularly when the bracelets come off. Oh and she's the God of War now which I'm annoyed about hearing because it spoiled the issue before I could read it. But yeah, she now has Ares' powers as well which will be revealed over time. Hal is a top ringslinger and is more than capable of attacking Hulk from a range and keeping him restrained whilst the team attacks him. Flash can have entire fights in less than a second and can send Superman flying so he'll be able to keep Hulk on the ropes. And Aquaman has gotten a massive amp and could send Hulk into the sea easily. Together, they're more than capable of subduing WWH. He had trouble with a weakened Sentry, a weaker Skrull Black Bolt impostor and if Reed actually implemented prep time the way he usually does rather than a PIS Sentry illusion, Reed would have taken WWH down too. He's far from invincible.

I'm not an expert on Sentry. But here are the scans, suppose you'd know.

I am pretty well versed with Sentry, anything i can help you out there?

The scan you posted are of course genuine, not out of context or anything, and are from Sentry vol 2 # 1 and the point as explicted stated by Paul Jenkins was to show "just how bloody brilliant the Sentry really is".

He has other feats as well, destroying a moon as a side effect of his fight against the Collective, apparently releasing enough energy to destroy worlds against Genis, nearly killing everyone on Earth as a side effect of his fight with World War Hulk (What If World War Hulk # 1, actually shows what would have happened if Sentry didnt stop), a fight between Sentry and Void was said to have potential to kill everyone on Earth, he also overpower Blue Marvel who was strong enough to be strolling around with a city size asteroid and nearly breaking moon in 2 with but 1 hit.

Sentry has feats, i am a skeptical person so i am not going to say he is leagues and bounds beyond Billy, but he sure as hell is up there with him in terms of power and a good case can be made for him actually being superior.

What's your take on the idea that Sentry was doing so much damage to WW Hulk that Hulk had to spent all of his gamma radiation to heal the damage and that's what reverted him back to Bruce Banner, while Sentry spent all the solar radiation in his body, which reverted him back to Bob Reynolds? And from what I've seen it looks like Sentry was depowered in that fight, which would make that feat even more impressive. Some Hulk fans like to say that Hulk was holding back during the entire event, but I don't see the Hulk holding back his healing factor, which most likely did overtime to heal Sentrys damage. I have never seen Hulk reverting back from too much damage and especially not such a powerful version like the WW Hulk. I really don't see Shazam standing a chance against such an amount of damage.

Some people are overhyping Sentrys win over Terrax in this thread way too much. I think that Terrax is a force, but the way Sentry defeated him is kinda nothing special in my opinion. He stopped his attack and broke the axe. Terrax is a 90 tonner or something, so Sentry is of course much stronger and breaking the axe apart is not an impossible feat. Terrax broke Silver Surfers board. It happens. I still give this fight to team 1 due to the Sentry, who had much more impressive fights. If he encounters Shazam, then I clearly don't see Shazam standing up to someone, who dishes out enough damage to destroy planets. And not even that, Sentry dished out so much damage in his fight against WW Hulk that it burned WW Hulk out! That is an insane feat! WW Hulk turned back to Bruce Banner, because he spent all of his gamma radiation or rage or whatever to heal the damage Sentry was dishing out. I honestly don't see Shazam standing up to that in the slightest. Sentry is a legit threat, if he is not jobbing for the sake of the plot.

In this battle Quasar drains them to nothing.

Besides, whole GLC also wouldn't be sure of winning this match.

Most of them are cannon fodders that wouldn't do better than Nova Corps against Gladiator. Sinestro Corps War more than proves it.

Only indyviduals would matter, but Quasar and Surfer would depower them, so Gladiator only need to protect them from fea attacks and Beta Ray Bill have to cover them with something similar to Infinity Vortex.

So you're saying these 4 can take down Kyle, Hal, John, Sodam Yat, Kilowog, Guy, and Alan Scott? Seriously? Kyle and Alan alone would give this team a hard time and could manage a win.

Surfer isn't in this.

Neither is Alan Scott =) How would the Lanterns deal with Quasars and Bills draining abilities? Or Gladiators superior speed? Or how would they get past Nova Primes ridiculous shields and his own formidable damage output? The only reason why there are 5 Green Lanterns in this fight is because I personally think that there are skill differences between these specific 5 Green Lanterns. I don't think that Guy would do as well against Gladiator as Hal would and so on.