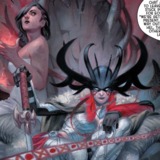 It is good to be back. Now be a dear and find me something fun.

@eddyemmerich: Set it up and will def get to it....possibly even quickly....

@_dark_knight: Thank you want sure who sparrow was. My old age I suck at alt recognition LOL

And whose is whose?

@mourningsparrow: Saweet. If I don't get called into work tonight I'll work on his bio.

@mourningsparrow: I got a character in mind who absorbs souls and needs to so he can continue being alive. That to magical for the team? He won't have magic he's a mutant/meta just needs souls

@arquitenens: (Sorry for my disappearance, its been a hell of a RL situation after another here. But im going to try and get on more often like I was. Needless to say i finally got my car back, works been effing nuts, and life in general has been slightly topsy turvy and i need a outlet again. So im back or im going to end up killing someone lol)

Ezmerelda hadnt seen such a child in sometime, it was almost an alien creature to her this young Abigail. She had the bloodline yet she knew almost nothing about what came with it. Without knowing it Ezmerelda brought her fingers to her cheeks as she had done for hundreds of years when she was deep in thought. Her pitch black nails shadowed themselves by the crimson red of her very own eyes, she looked the young child up and down until she had thought about what to do with her entirely. In a matter of seconds she had figured it all out, for such a dopey persona if not infantile Ezmerelda was a wise woman let alone the wisest of the Witches around these days.

She spoke softly to Abigail "Watch me....I wish to show you things..." raising her hands up from her cheeks and into the air "Ange Ym Othyin" she tried to pronounce and sound out every word so that Abigail herself could understand and hopefully repeat. As she spoke these words her hands slowly fell downwards to the ground and as they passed her body her attire changed. In a swift manner her entire attire had changed drastically, from a sleek and regal gown into that of more street typical clothing. "Oyh Ibik Erhe" again speaking slowly and carefully as she snapped her fingers and a motorcycle appeared before the two ladies. "I feel that with the wind against my face, I can truly think." Moving over to the bike she wrapped one leg over its humming idle, kicking the stand out from beneath her she balanced the bike. Revving it soundly she smirked and looked back to Abigail "Ulmhet.." and a helmet materialized over her head. Swiping the visor open she smirked and gestured with her head for the young woman to come and hop on.

@arquitenens: All around ther two ladies the forest came alive in its very roots, as Ezmerelda circled the young Abigail as she tried to find a way to say what she wished to. This young woman would not come so easily into a Coven with her in charge if she did not understand her intentions fully. Ez arms swayed as she walked and the leaves and branches reached out to her as she moved, she was almost dancing with the forest as she finally stopped and spun on her heel looking straight at Abigail. "I have been alone for sometime, and I know that even with bloodties our world is slowly becoming something of a myth if not a legend. Once we were plentiful, now we either hide ourselves away for so long we forgot how to interact, or we are dead. I want to find those like myself and form something, a Coven. Something to spark the resurgence of our own kind. They still are out there, but they know that the world has forgotten them. I want to make the world remember that Magik isnt a Warlocks world. Its the world of the Witch, it started with real Witches and I will show them." bouncing off her tip toes Ezmerelda leaped forward and inched closer to Abigail.

"I plucked you from your home because I wanted a bit of privacy so I could speak of your lineage without anyone prying." snapping her fingers the runes that surrounded both disappeared and siphoned back into her body. Another snap of her fingers as she placed her hand upon Abigail's shoulder again and they returned to her home. What had seemed as only a few moments, had actually been a full 24 hours. Now it was dark and the moon shined in the midnight air, Ezmerelda looked at Abigail "I wish to speak further, but I can see your confused if not uncomfortable with how things...unfolded..." she chuckled at her own words trying to convey her real sincere emotion and words "So how can we further this discussion but keep your mind at ease?"