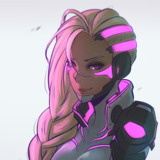 @the_ghostshell: sounds good! and if you're not feeling that good, it's fine if you post tomorrow even! Thank you for wanting to open! ^_^

As the melting orbs rained from the melancholy sky, Blair aimlessly wandered hoping to hear the slightest sound in order to pin point the location of her opponent.

"come coward" In her perception, his voice felt like a roar that echoed through her body from yards away. Synchronizing her vocal chords Blair cleared her throat, "With my pleasure." Being able to make her voice travel far from its origin, she gave the illusion of him potentially hearing her words as if she was standing over his shoulder. For the next 30 seconds, her voice will be on a loop to hopefully give him a sense of paranoia, if that was possible to create.

Pressing her palms to the ground, Blair transfers stored light energy from her body and converts it into sound. Sending waves upon waves of sound underneath the soil, the reluctant hero hopes aims to create an unsteady field. With the fiery pain that is causing boils to now appear in her insides, this impacts the level of strength she pours into how much energy she inputs. If the timing is correct, the ground should shake enough to hopefully knock her opponent off their balance. Instead of the buildings falling apart, she hopes to use her waves to distort the clay like buildings as a distraction.

Using whatever strength she had left in that moment, Blair jumps high into the sky. Using her capabilities of sound to have her momentarily levitate her, she sends a multi color blast of light from her hands aimed to potentially harm her opponent. After the initial blast left her hands, she immediately falls back to the chemical exposed ground.

Blue embers of heat radiate from the pores of her skin as they ascended into the air around her. Breaking free the small whispers of fire bleeds into the night’s sky. Blending in with the swirls of blue, dancing next to the hues of yellow and the abyss of black. The amount of energy releasing from her body is bringing her body temperature down to an abnormal level. Her skin could feel like the cold metal inside of a freezer.

Her pink hair stands out in this environment like a flamingo poking its head around in Russia. The young hero, finds herself walking around a little village of empty dull houses. Something you’d see in a recent horror game. Maybe she’ll find a hidden treasure, a healing item would be kind of nifty. Her ice cold hands touch the walls of the interior of what is a mold of a house. Nothing on the inside, just gray walls, and very square holes in a wall or two to give the illusion of it being a window.

Each “house” felt too empty. As if she was exploring an unfinished miniature village that would be used to show business owners in a retail meeting. As she ventured through the multitude of the caricature of houses she knew by now, that her moment of prowling the area was coming to an end. Something was arriving.

Walking into this empty gray street, she feels her body temperature beginning to increase at a dramatic rate.

As it increases, she reflects on what her Master Feral Nova once said, “when you take the cookie doh, it needs to be heated to mold the perfect cookie; however, don’t push the heat too high or you’ll have one very disappointing cookie” When her body finally lets steam roll off of it, she halts the rising level to there. Over exhausting herself will easily give her opponent the win.

Blair in preparation of knowing that her opponent is arriving, earlier had released balls of light from her body in the sky above. Those embers are almost invisible to the naked eye unless they happen to pass by the yellow and blacks areas in the background. Chances are her opponent could easily miss like all of them by standing in a good spot or if they were very good at dodging, but if at least one manage to hit them then there would be a 1 degree burn that would be the size of a golf ball. Sounds awfully painful, really.

Children laughs and the chiming of bikes fill the air of the street. The rays of the sun shine down brightly onto the citizens of Paradise City. Today is a Monday, which is the official start of the week. A day when the townspeople welcome the newly invited tourists to explore the depths of the town to their fullest desires. There can be guests seen entering the multiple lines for the roller coasters at the amusement park. Guests who are feeling full from drowning themselves to their favorite foods and beverages. People who can even be simply checking into the paradise hotel or even checking into the candy shop that is next door to the massive hotel of dreams.

Inside the delicious sugar shop, there is a young woman with pink hair. A decorated bright blue bow on her head as she perfectly stands behind a cash register. All around her through the small shop she operates there is candy decorated all around. Chocolates, sour gummies, regular gummies, lollipops, anything you can imagine. Except for candycorn, cause that doesn’t belong in a grand city of perfection. A bright smile shines from her face as she interacts with the customers who are super energized and hyped up with their bags full of treats.

She wears a white shirt and white jeans along with a baby blue apron. A decorated name tag with stickers of rainbow lollipops that reads the name Blair S. She has a pink nail polish that shimmers with glitter whenever light shines from the window onto it.

On the weekends, she is lucky to have time off of work. On Fridays she may Usually hit up the arcade on Union or the movie theater on Cly. There is a cute bakery shop next to a mini golf area not too far from the arcade that she enjoys.

On Saturdays, Blair will head into town to do her grocery shopping before indulging into her desire to dance at the nightclub. She feels alive when the music generates through her body. Almost as if flashing lights and sound is a nutrition that her body feeds off of.

Then on Sundays, all the stores are closed. It's meant to be a day off for anyone in town. If there are emergency items someone might need from a store the citizens are nice enough to lend food, ingredients, or tampons to someone if they need it. There is, however, one mandatory meeting that is held within the town for the citizens. It's a welcoming for the tourists to make sure they feel at home. Oddly, enough, the tourists have so much exhilarating fun at this event they decide to permanently stay and join. They are able to witness the true light that the city brings. It's totally not weird that they drop everything in their lives and cut contact off with loved ones.

With it being Monday; however, she simply ends her shift be checking out the last customer with their bag of snacks. After watching them walk through the door, she hurries over to lock the door up and to switch the open sign to close. With a sigh of relief, she breathes deeply after her long 16 hour shift. She can finally eat now. Blair pulls the strings on the back of her apron to loosen the hold it has on her torso. Grabbing the string around her neck she pulls it over her head. Glancing at her reflection in a window she drops the apron as her mouth falls.

Blair sees the image of herself warp before her very eyes. Her candy shop attire transforms into a black leather suit with a giant yellow x on her torso. The irises of her eyes changing color as she holds a giant pink rocket launcher in her grasp. The weapon slips from her grasp. As it touches the ground lights flicker from the launcher, particles of light expelling itself. The weapon vanishes upon impact leaving the particles of light to cascade into the air. As they pass her body her heroic outfit disappears, leaving her work attire still in tact. “What was that?”

In a dingy cold room there is a cage, lined with electric pulses. Zaps could occasionally be heard from the room. Inside there is a white dog that is asleep. As the puppy snores, a simple tear can be seen descending down his snout as he dreams of his favorite human. A special human of his with a lot of pink hair who loves him deeply.

Unknown to most, this dog once went by the name of Cellular Dog. Why he is away from his human Blair remains a mystery.

In an unexpected moment, he opens his eyes to reveal a blue glare that shines across the room like a phone at night time. The dog lets out a loud cry as he tries to telepathically reach out to anyone close by. “....woof”. Random metallic objects are flung across the room as he let out a psychic burst. In response, a pulse of electricity shoots into the cage as his white paw gets too close to the opening.

He lays there, with each moment he is able to telepathically find a member of the Titans, he is electrocuted and tortured before he can wake them up from the nightmare they found themselves in. For, in actuality this town is a realm of torture and unlike anything they could've ever encountered. He fights day and night waiting to escape so he could help save his family.

@anonymous3: Vine Titans is an old superhero team I had back in the day.

best of luck with this team!