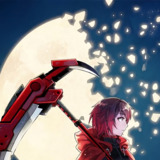 wait,wait and wait just a minute now...before we go on with my story let me introduce myself, I am Cara Hunter heroic female vigilante of the Cerberus Organization and member of Hero Brigade Paragon!

Now you might say who the heck are those people?

well it's simple really, they are a bunch of dudes and dudettes going across or traveling..what ever you grammar nazi's think erh hem... through different universes offering help to any people who will accept it excluding the bad guys though.....so anywaaaay back to explaining what's going on.

How a simple recon mission turned into a Bat fight

"WHAT'S UP CARA!" Valla Shayd said in her usual annoying yet cheerful tone to Batgirl while skipping gleefully towards her all while twirling a goat staff.

"Sup" Cara said cooly as she shrugged her shoulders "nothing big really, they're sending me on a recon mission with a few troopers to investigate a possible mutant lizard infestation"

"Uh,,,erm" Cara placed her right hand on the back of her masked head rubbing it as she tried to think of an answer when he reality she didn't bother checking the data they gave her.

"Uh...erm is not an answer" Shayd said while shrinking down her goat staff by simply pushing it against one of her magical pockets

"YOU?" Valla Shayd the daughter of one of the first legendary Cerberus Heroes broke into a hysterical laughter for about a full minute, she finally managed to catch her breath as she slowed down her laughter and slowly wiped her tears away "that's comedy gold" she said flicking the last tear with her index finger turning it into gold.

"By the blades you did forget!" Valla said surprised widening her eyes as her silver eye brows raised up as well

"El oh el" Cara said in a sarcastic tone putting the data pad back in place "are you going to start blogging about it like everything that you find surprising?"

"Psssh" Valla crossed her arms and scoffed while looking at a Cerberus drop ship exit the space ship they were in, "as if I always do that"

"Mph, you better" Cara said confidently with a smug look, Cara turned and saw the bulky looking powered armored troops walking towards her the ol black,red,white and yellow were the colors of the Cerberus emblem she so often saw "So where's Al and my father squad leader Breton?" Cara said enthusiastically to the leader of the six man squad

a shot of disappointed pain hit Cara's heart, this is the fourth time in a row he's done this to me Cara gently bit her lower lip but still kept her enthusiastic tone "okay then when and where are we going!?!"

"HEY!" Cara said annoyed as she looked at her pouch and then back at Shayd "goddammit why do you have to phase through my s&^% when I'm not looking!"

(Yah I know it's short but this is more of a little sneak peak of Cara's adventures 5 years before entering the Vine Universe, just tell me what you think of this so far? btw the story will be ended this is just like a part 1)