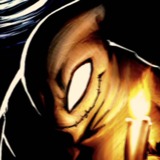 A bumpus wumpus for this fellow.

I don't know why people are saying anything other than Gluttony is the biggest sin. I mean, come on, it's the sin of getting fa............

Oh, this is OUR sin.

This is the correct answer!

OI! I need this thing to live!

No human being is born thinking that other humans should be killed for any real reason. They are raised this way, to grow bigoted and hateful.

Many people are arguing here over whether or not Muslims are happy over what happened in Paris. I can tell you the truth. Some are. But some aren't.

The world isn't black and white.

This is not GI JOE fighting COBRA.

These are so many people, of different colours and creeds, turned against each other. We have been bombing each other, warring with each other for decades now.

The common mentality is now "us" or "them".

Are Westerners not happy when a drone hits a mosque and kills a d-bag who was spouting radical hogwash meant to stir up hatred against the West? I mean sure, uninvolved, innocent people were blown to smithereens along with him. But who cares? We got the baddie!

To clarify, no, not everyone is happy that men and women were killed needlessly, but they were collateral damage. The Middle East feels the same way. They are angered, hurt, and in need of lashing out. Some of them strike back.

And while the average joe somewhere in the Middle East isn't going to be jumping for joy about so many people dying, they might very easily think of it as just desserts.

This may be a bit of a rambling incoherent mess, but the point is that this is not black and white. The heroes and villains are not cut and dry. Both sides have done crap things to the others, and both sides want vengeance. If there's not something done to show an olive branch here, this will descend into war.

@midnightdragon18: Whatever you do, just do it with this music in the background.

Sean Connery. I think he's still got it.