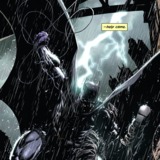 I'm just a normal kid who loves Daredevil buys and reviews comics and lives in England.

I eventually intend to review every issue of the DC series I am buying from 1-12 etc.

How I got into comics

I always liked X-men from the Films and the TV series so in the end I decided to borrow one at the library the first comic I ever read was Joss Whedon Astonishing X-men Gifted and it was great place to start after that I read all of the other Astonishing X-men Volumes.

I kept borrowing comics from the Library and expanded into other areas reading World war Hulk and other comics. My parents eventually found the 5 schism issues in a comic shop once and bought them for me after reading this I became interested in Wolverine and the X-men and Uncanny X-men so I visited a comic shop and bought Wolverine and the X-men #4 and Uncanny X-men #5.

After enjoying these I decided to start buying the series and now I got my brother into Wolverine and the X-men so he now buys it. My comic shop at the time did not have the next few issues of Uncanny X-men I got #6 and #7 but until #11 I couldn't find anymore the one series I have kept consistently since the start it's a great series and hugely underrated people should buy it. After this around the time Spider-men came out I decided to buy more series I now buy. (These covers are the one's I started from)(some of these series have ended)

I can't wait for Guardians of the Galaxy, Young Avengers and the Age of Ultron.

My favourite series is Swamp thing closely followed by Batman.