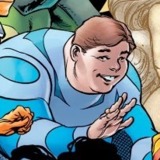 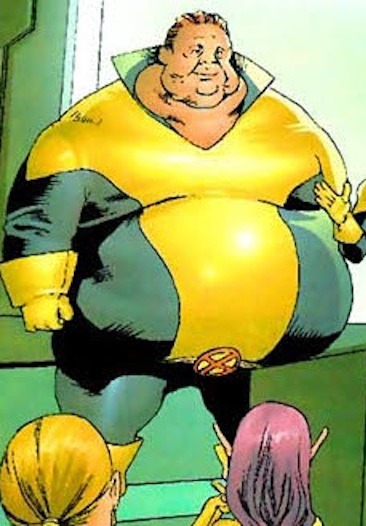 Blubber - The Ton of Fun Hero!

From the moment Grant was born his parents realized he was, “special”. From the distinct expression on his face and the low brain activity, the Doctors diagnosed him with down syndromes. For the rest of his life he would be considered different and slower than most. But that didn't stop his parents from loving him. Grant was raised like any normal kid, or as close to normal as possible. He had friends, hobbies and goals like every one else, however even he knew he was different.

For the first seventeen years of Grant's life nothing much happened. He went to a special school and even got a part time job at a local comic book shop. It was a very basic and simple life for him, but it was one he enjoyed. Then on his eighteenth birthday everything changed. It seemed over night he was miraculously cured. His facial expression was more normal and his intellect grew to that of a standard eighteen year old. The doctors were stumped but after a few tests it was discovered that Grant was in fact a mutant.

With no other signs of mutation Grant began going to a normal High school. Again he made friends and went out for sports, but due to his simplistic raising's he appear naive to others. To his face Grant was treated as an equal but behind his back he was mocked. Still Grant tried to appear normal and in effect made the wrestling team. For some unknown reason he seemed to excel at the sport and made first string. Match after match Grant won with ease. Slowly Grant began to become popular. He was invited to the best parties and hung out with all the cute girls, but deep inside he realized he was “just a friend” nothing more.

After four years of high school, Grant graduated with a major in philosophy and lettered in wrestling. In fact it was his wrestling that earned him a scholarship to a local college. Again he excelled in wrestling, it was if his body could bend and twist beyond normal proportions. That and his natural strength placed him in the regionals every year. Then suddenly it all changed. Grant was on the mat with one of his greatest opponents, when suddenly his body mass increased by hundreds of pounds. For the second time in his life his mutant gene had kicked in. He was now inhumanly strong, flexible, durable, and unfortunately slow again

For obvious reason Grant was no longer aloud to wrestle, and without wrestling he had no scholarship. He was forced to leave college and move back home with his parents. His home town friends wanted to except him back, but the sight of Grant weighing over five hundred pounds unsettled them. The only thing going for Grant was, he got back his old job at the comic shop. For the most part he was left alone and did his work.

Then one day at work he heard the sounds of an ambulance blaring down the road. Like most people he stepped out side to see it, just in time to watch it wreck into another car. As bystanders began to form the medic declared his situation. Inside his van was a man who would die unless he reached the hospital immediately. Instinctively Grant knew he had to do something. With ease he picked the ambulance up over his head and took one mighty leap. In one bound he crossed three miles to land at the Hospital's emergency entrance where the injured man was treated immediately. Little did Grant know that the man he saved was in fact a local reporter for the towns paper.

The next day the front page was dedicated to the heavy weight hero nickname “Blubber.” It seemed now that Grant was a bona-fide hero, complete with a new name. The towns people now saw him in a different light. He was now respected and admired. The whole town threw him a party and even named a street after him. Now a days people go to the comic store he works at just to talk to him. Grant was now on top of the world. But to him, his world did not expand past his neighbor hood. He was the type of hero that would help get a cat out of a tree, but not fight off a world invasion. He accepted he was now “special” in a positive way, and only time would tell where his life would go next!