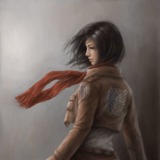 "Sorry after being made a statue in a fight, I didn't have time to go clothes shopping. And then after being freed this is what I walked into." Tasha remarked bluntly, yes she'd prefer better clothes but it wasn't an option. Admittedly her clothing choice wasn't particularly better pre combat scenes but that was beside the point. And while she'd taken such commentary well enough it usually came from people she hated or from someone she liked. If her aunt wanted to judge it didn't matter, if it was Luke it was more of a joke. This came from someone she didn't know who sounded like someone she didn't want to know, but dressed like someone she'd loved.

"Vampire not jumping the gun don't flatter yourself. I haven't eaten in like a year okay?" It honestly hurt within the pit of her stomach she was dying to gorge herself on blood. However before her was a hero at least to some degree and she didn't feel right trying to rip his throat open if it could be helped. "Also despite being starving and half wanting to rip you apart for looking like my presumably dead ex I'm trying not to act on said impulse. I'd say that's some control."

(Not my best >.> Not feeling Nat as much as other alts)

"Yeah kind of did it's a shitty hello." The vampire remarked in respondance to the banter moments before her jaw closed in. Her bite like that of an alligator her teeth sank pretty far into the webbing, but didn't manage to pierce the fabric. More so it was sticky and simply unpleasant. Seeing what was coming with a hug like movement Natasha knew she had to move. Her vampiric abilities were few she couldn't endure the physical wounds like before. Though able to heal from most anything it had requirements. Her reaction was a peculiar one being a sort of jump mixed with a handstand. Done primarily with her neck and jaw, bladed protrusions ripped apart flesh but didn't detain her.

Releasing her hold the vampire fell behind her adversary in a graceful flip though leaving an ugly vermillion trail along the pavement. Clothes even more shredded and covered in lacerations Natasha stood as if no worse for ware. Her healing abilities and history of violence allowed her to push past the pain with relative ease. "You know I can't keep letting you abuse me like this, I'm not good at the not fighting back thing." Attacking a vigilante or hero wasn't a desire even if they were dressed like her boyfriend. However the twitch in her hand was telling her the hunger was coming close to win over.

"Would it help if I pointed out I was a statue at least during part of it" Tasha taking a moment to dust herself off taking slight amusement of the absurdity of the world she lived in. However no backing out of this ordeal was possible the nobody dressed as Nobody was out for blood. His voice had a similarity to Luke's that sent a faint chill down the bastard Stark's spine. A blade came first lashing forward and Natasha with a fluidity graced with experience but showing some rust the goth managed to sidestep. Evading the blade but only narrowly due to her muscles tense and still faintly stoic in articulation.

As the blade passed her by however a gun was drawn. Lacking the speed of before Tasha failed to react well and with that a bullet ripped through her stomach with ease. A rather clean shot meeting little resistance against the thin soft skinned vampire. "Ow, could you not do that?" Not having backed up and considering the step forward in the lunge Natasha reacted with a lunge of her own. Vermilion eyes having a bit of a glisten as the vampire looked to drive her fangs into the throat of the arachnid. While not out to kill naturally she was out for blood. After almost a year of being in stone the hunger was something the vampire couldn't put aside.

"Given that I'm not being met by a hug or some emo recap I'm guessing your not Luke." Natasha took the arrival of the arachnid with a blasé indifference, dying wasn't much of a concern to her by now and costumes were far from new territory. It did get under her skin that there was a Nobody before her being played by a nobody. Then again the spider look was common, there having even been a heroic clan of said arachnids some time ago. Personally Tasha would much rather be a scorpion their design was cooler. And as blades became unsheathed from her probable assailant the vampire's heads casually slipped into jacket pockets.

"Would you believe me if I said you saw wrong and that while I've got the murder weapons on my hips I'm not the killer?" She hadn't offed anyone a fanboy murderously set her free. Of course with cops rarely giving a damn and the mueseum having no recordings Tasha also had no evidence to back her statement up either.

"Heroes and vigilantes they're as frequent as Starbucks, but the legends among them not so much." The Museum owner commented as he tried to go about his job with some element of enthusiasm. He'd inherited the museum from his parents slain by some criminal or another. He couldn't even remember the killers, having seen so many crimes being victim to a handful and becoming a drunk to escape depression. Gothic wasn't exactly known for tourism or students out for an education, the job was a dead end with poor profit before he inherited the place. Longer Gothic was an isolated cesspool worse the conditions got.

"Our newest attraction I do believe a legend. A rare diamond found amongst shit who found her calling over in Japan's equivalent of this shit town." Truth be told he hated the attraction it was a sickening thought, his family though not in Gothic and afraid to visit the city bought him the statue to try and raise revenue. "Blood Diamond made a name for herself in Ronins Rest carving up criminals regularly. She was that classic monster trope of fighting fire with fire or whatever. She became a sort of violent idol, those not sick in the head could look to her to split the heads of the sick thugs and vermin." His explanation was done for the teens in the small crowd they liked this kind of tale. Pretty goth who murdered the wicked it gave an escape from the bleak world. While the owner thought it childish he could indulge the younger who still had hope.

"Don't ask me about her love life though, I'm sure it was dirty but I didn't want to take notes on that. I was to distracted by learning of her Nazi relatives and alleged relation to a previous president. That's right she fought her aunt to the death or some shit, her aunt being a torturous vampire nazi. No wonder she was in Japan her history half sounds like an anime. Maybe an amalgam like Cardula." Amidst the rambling attempt at a job a teen likely turning eighteen only a week ago approached the statue. A creeped out and paranoid "shit" escaped the owner in a whisper. Ransoms were terrifying, especially in Gothic. The last security guard died when a fanboy took an arrow allegedly belonging to one of the Gothic archers sniffed it and then used it as a murder weapon.

From nothing the teen materialized a pair of swords of shining steel and carmine sheaths. Only one guard was affordable and he raised to the aid with a futile swing of a bat from home. Better equipment couldn't be afforded and the bat though showing wear of reliable use was split by the blade. What followed was a rolling head of the obese guard and the mixed reactions of those around. Some started to record, some laughed or tried to join and others ran. What followed was a gore filled mess all to common in Gothic it culminated with a blade piercing the owners gut, and twisting in a fashion to spill organs. The owner having wedged a shard of wood from the bat into the teen's throat.

In dying moments the curious blades that became clean almost immediately as if feeding on the blood lashed out at the statue. Splitting the lithe figure of Natasha into pieces before diving the blade into the chest of the bleeding statue. Rather then more bloodshed or fading into burning ash however the stone fracked and fell aside as new limbs grew and the body recovered. Only a minute later and amongst the carnage stood a girl in a tattered clothes and bloodstains plucking the blade from her chest.

"Be honest kid, you thought you'd get laid huh?" Remarked the museum owner in what would be his final words.

"Yup" the teen would answer with a most undignified last word.

"Well that's a buzz kill of a welcome home party. Fuck it I need a drink, I'll be damned if I have street rat corpse blood as the first meal. Girl has to have standards." The vampire remarked with a rather unremarkable departure from the mueseum and bloody scene. Her mutation of hers was making her immediately aware of the changes that had gone through her as a side effect. She wasn't ashamed to admit it was a downgrade not looked fondly on. Wasn't right to complain about not being a statue however so she let the complaint fade to the back of her mind. Being depressing wasn't fun, fun was murder and a crushing stalker of a fan boy just gave a new toy for such a hobbie.

I could give praise and all that but naw ;P

@lokkie: so you've been gone for like forever xD welcome back lol

@lokkie: Ivy was forever ago xD

Strangely enough though one of the cv updates bumped the Ivy Status to be the current status O.o have no idea how it did that

Diamond is out. Took awhile to think how I wanted to do the post or even if I did want to lol do quite like Natasha but what the hell will give Hanz a victory :)