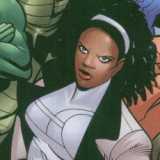 Randomly blogging/venting my frustration about Cyborg

"will Cyborg get his own series?"

was asked by a fan, in which some one on the DC panel replied with something along the lines of

not to many people where thrilled.

I saw this on a live stream over at newsarama (x)

This isn't any indication, nor does it solidify, that there will not be a Cyborg solo series but, the fact that the crowd was even asked if they would like to see a cyborg series in the first place, makes me wonder if DC ever had any plans of giving him a solo series to begin with. I'm probably reading to much into this, but this just reassures what many already know. Which is, Cyborg being a founding member of the JL was nothing more than a diversity trope. There is literally no other reason for him being there. DC may indeed have something planned for Cy but I'm trying to figure out, just what the hell are they exactly waiting on to initiate it? As someone has already pointed out and vented their frustration, Justice League 18 solicits were extremely misleading. Yea, yea I know solicits lie all the time however, when there are expectations for character development of a character that doesn't have any being solicited to actually do something, to "take center stage", misleading ass solicits infuriate the hell out of me.