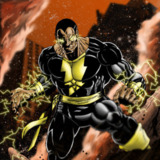 Anyone can be racist and idk how anyone can think otherwise.

Pointing out the existence of an issue=whining?. Oh i see.

You got it. In 2017 pointing out any kind of issue is whining, calling out actual sexism/racism is being a SJW, and factual information is no longer a thing because screw facts people like their opinions better.

Of course it does.

There are people out there that just don't like to see empowered females, they especially don't like when they are praised for it. Why? Idk probably some kind of underlying insecurities but it's not going to ever go away.

You wouldn't believe the filth I have read on gfaqs concerning female characters like Aloy from Horizon or any of the female Dragon Ball characters that were/are fighters like 18, Videl and Chi-Chi.

It really comes down to whether we think the Goku's more mastered SSJB in the manga is stronger than SSJBKKX10.

IIRC Manga Goku in his more mastered SSJB was doing pretty well against Merged Zamasu while I don't remember anime Goku doing that well against him on his own. Though I admit I haven't re-watched the arc since the episodes first aired every Saturday so I could be forgetting.

They both have pros and cons.

GT I feel kept with the natural progression of the characters and their personalities, while Super seems to want to focus on the couple things that the characters are known for and dial it up to 50.

GT also had SSJ4, which whether you like it or not you have to at least admit it is the most original SSJ form since the original.

And I know everyone says this but GT also had some cool ideas, but just kind of failed at executing them.

And Super is kind of a mess in terms of the power scaling, and I know the series has always had crazy power ups but it at least it tried to explain it in someway. We had the saiyans zenkias, or namekian potential unlock, ROSAT training, time skip etc. while Super it just offhandedly like " oh yeah, these guys that have been all but retired since the Cell games have been training and are relevant again because they have been training "

I am all for these characters coming back and getting to shine like they used to but they have just handled it so poorly. I would have much rather them abuse the ROSAT or Whis's staff chamber to explain them getting strong rather than them just say Krillin used his gym and Roshi has been secretly training this whole time lol

Wow that turned into kind of a rant lol anyway I love both and will continue to watch and support Super but I honestly don't even know which is better because they both have good things and bad things.

Nonsense. It's just a good movie. Not everything with a woman in it is the fault of the feminazi sjw boogymen everybody are so afraid of.

I personally like L's debut album Lifestylez Ov Da Poor & Dangerous more than any of Kendrick's albums or mixtapes but Kendrick does have more material and is a bit more diverse over all.

@princearagorn1: Sad to see you go man. I haven't posted here in a few years myself but I got this notification in my email and wanted to pop in and wish you the best with everything. Good luck man!

Somebody should make an official discussion thread for all updates, character reveals, game info etc. it could also be a good place for people getting the game to share info so we can play when the game comes out.