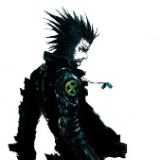 Anyone watch the Euro 2012 Qualifiers?

Whats the first song you learned to play?

Whats the first song you learned to play on an musical instrument? my was half the world away by Oasis.

Henry is possibly the best player i've seen in the prem, hope he does well.

I know someone who will be happy with this.

Did any of you help kill Jason Todd?

The biggest tournament in the world is only a few weeks away, teams like Brazil, Spain, Italy, England, Argentina, Holland and Germany are obvious favourites to win the biggest sporting prize in the world. I think Argentina might win it for the simple reason they can outscore any team in the tournament, they have the best player in the world in their team in the shape of Lionel Messi, who has scored 42 goals in only 50 games this season (from the wing!!!!!!!) and Carlos Tevez, the Manchester City striker has become a God in Manchester this year after making the switch from Salford United (oooppps I mean Manchester United) to the only REAL team in Manchester, Manchester City : ) he has 29 goals in 40 games this year and has been proven to be one of the best strikers in the world and has tore defences apart on his own ( John Terry is still having Nightmares about him), any way that’s my prediction but if Wayne Rooney is fit and take Adam Johnson to the world cup England have a chance. COME ON ENGLAND!!!!!!!!!!!!!!

Best Album of the last 30 years?


A couple of days ago at the Brit awards turned 30 years old so to celebrate they awarded a special award "the best British album of the last 30 years" and they gave this award to oasis’s second album "What’s the story morning glory", now i was thrilled with this because oasis are [where?] my favourite band and lets face it us manc's have to stick together but i don't think what’s the story morning glory is'nt the best album of the last 30 years, i thought it was another oasis album called " definitely  maybe" which was their first album and was released in 1994 now i was 2 years old when this came out and it still speaks volumes to me and a lot of other people that must be worth something right? anyway what’s you're best album of the last 30 years?


My first choice is Ghost rider, GR has been a sleeper hit for marvel since it started again in 2006, Johnny Blaze and Dan Ketch are very detailed characters and they two of the most power being in marvel, Johnny always tries to do the right thing but always balls it up big time and has been screwed over more times that any marvel hero [e.g making deals with the devil to save his adopted father but he ends up sending him to hell], Danny hated being Ghost Rider but when he got rid of it he realised he was addicted to the power so he got tricked by a renegade angel to go around killing all the other Ghost Rider's in the world so they are not just guys with their skulls on fire and are powerful enough to do anything they are in every complex characters. Also they dont need to interact with the rest of the marvel universe, you will never see someone like captain america or spider-man or wolverine co-star in a GR comic unless its when the GR brothers decide to go an kill the marvel universe.

Second choice is Red Robin for the simple reason that Tim Drake [Wayne] is awesome.
Start the Conversation


finally got to the 50,000 points mark :) thinking about it though it nothing compaired to aztek and people like that.
8 Comments