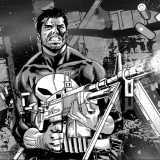 Well the three movies have many flaws... a lot of them. My favorite it's still Dolph Lundgren Punisher.

Thomas Jane - portrayed a drunk and depressive Punisher, who felt sorry for himself.
Stevenson - Was by far the best Punisher physically but it didn't had the best director. I wonder how Stevenson will portray the character with the team of Netflix supporting him. Probably the best Punisher ever.

It reminds me a bit of Chechetto's skull because it was custom made. And to be honest, it's the only one that makes sense.

Makes sense he can do it himself without order it from somewhere.

Marvel didn't called it "off" because Parlov already posted some images of the comic. It will be released probably this year.

Punisher MAX, is set in an alternate universe, it doesn't have nothing to do with current Marvel Universe Punisher who is a afghanistan veteran.

No. Penance Stare doesn't affect him because he doesn't regret any of the bad guys he kills.

@ravenvice01: Unfortunately, they wanted to use him as "Jigsaw" in the 2004 game. We all know that Jigsaw is Billy Russo and not Howard Saint. But they wanted to create a new persona for Jigsaw. Dumb move.

@avenging_x_bolt: The continuity is the same but like it was said the audiences are different. The television series are for mature audiences.

I'm happy with the casting but to be honest never thought of Jon as Frank Castle. Let's see if the producer can give him a good script and make him an antagonist instead of a villain.

@teerack: Edmondson isn't a soldier, he is a writer that has a huge experience in military books and who has many contacts in the military.

I agree with most you said, but after his family was killed. Frank as a soldier was far gone. He is the Punisher. He only relies on his experience as soldier to do what he does best. Punish the wicked.

Frank isn't "old", he isn't the vietnam vet anymore. He is now an afghanistan veteran so he probably is in his 40's maximum. Portraying him as a regular soldier is in my opinion the huge mistake of Edmondson. He couldn't handle the Howling Commandos twice! They might be good but outmatch Frank twice is a bit overated, imo.
So if he's being downgraded? To me, yes. He seems like a regular soldier or a CIA/FBI operator who lives in MU and gets beaten all the time. And as a fan for more than 20 years, Frank is more than that, i can't recognise the Punisher like this.

Regarding his fight with Falcon and trying not to hurt him much is a huge disadvantage. But i still think he could find a way to beat him, even in hand to hand in mid-air but as he is being portrayed in this run, this won't happen. I'm antecipating another beating or someone will intervene in the fight or even he is going to give a good chat to Falcon and say how wrong he is about him.

Frank is far superior than Falcon. That's the reality, but in this run he's been downgraded in his skills, so or the Howling Commandos are going to save his @$$ or he will get beaten (again).