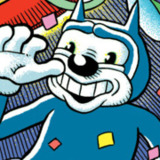 I am the only element of continuity in my own life.

After finishing the last issue of Scalped, issue #60, I wanted to write this blog. No, wait, scratch that. I NEEDED to write this.

Written by Jason Aaron, the beautiful dusty art work provided by R.M. Guera and cover art done by Jock, Scalped is the reason why Aaron gets praise and why he should be among everyone's favorite writers, even if you don't like his Marvel work, since he sure in hell is mine.

Scalped has been criminally a under looked series for some bizarre reason that can't be explained, well maybe it can be, it being a book about minority group, in which case it would be fitting.

I myself started reading Scalped about 2 or 1,5 years ago. Started with the first trade. Thought it was good but in retrospective, I can admit that it was the weakest arc in the series but it's natural for most Vertigo series to have a slightly weak first arc compared to the rest of the series since most of the character introduction and set up happens in there.Later on I got myself the second trade. It got better. Some time after that I got trades 3-7 and started om nom noming them. Couldn't believe it. After each issue it got more intensive, more violent, more dramatic and better.

Just the realness of the characters...wow. Just wow. Not every series can make you care about the elderly or a guy who doesn't have an identity of his own. Scalped just shows you that everyone has problems and most of the time, they're worse than yours.

It really deserves the quotes that have been added to its trades' covers. Such as:

(Sorry for their sizes)

Not only Scalped is the best series about native Americans and the best creator-owned series since 100 Bullets ended, it's also managed to sway its way to the Vertigo's list of all time greats.

And people complain about the lack of good comics or buy trashy events, and series like Scalped get ignored. Lawd.

Ah yes, the last issue. Since it just came out today, I won't spoil anything except for one thing. I'll say: "Well done, Aaron. You didn't disappoint." The best thing about the ending was:

SPOILER WARNING: Click here to reveal hidden content.
was it really the ending or is there a possibly continuing coming?
EDIT: Aaron himself said it was finished. Now shut up.

With Scalped ending, I hope Aaron will start with his upcoming creator-owned project that he's been talking about in interviews. Personally I'd hope he'd do something similar to Scalped #35 (one of my favorite Scalped issues and all time one-shots). Writing about regular folk and their problems. And later what's in the spoiler box.

Farewell and thank you, Scalped.

Just something that I found on Dave Johnson's devianArt that I thought was funny.

I get being a new artist is hard. We've all been there. And its real tempting to take from a more established artists than yourself in order to elevate your own art. Really, I get it. But when you get caught, confess. It'll go easier on you. Acting righteous and claiming that you were really ripping off "other" work that is not your own, and even claiming that you've never seen the original art is not the best way to handle the situation. All this can be seen here...[link]

This poor Italian artist just woke up to a shit storm of epic proportions. Do I feel bad for him? Nah, he'll get over it. Hopefully, he'll learn a powerful lesson. And that is; if you're gonna be inspired, give credit where credit is due. And if you don't, and then get caught, be contrite. It'll lesson the pain.
And you might ask yourself, "hey Dave, why do you give a shit about this?" Well, in some ways I don't. It doesn't hurt me or my career in the slightest. I'm just putting it out there. To let you be the judge.
Here is just some of the offenses. Reached 10k wiki points during this week. (Now I have over 11k points) Not bad. Still haven't made big edits :/ But I will! (hopefully).
BB

Zuck's version of the movie!
Start the Conversation

I am Iron Man

This is old but it's still great.