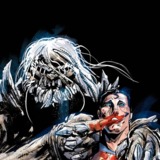 got tired of repeating your list everytime a User is directed to you for a comprehensive reading list? (I know I did, and I know I've seen it happen a few times)

a little nerdy. (thats not a bad thing)

you can fill the rest with other arcs from those same Cap A, Moon Knight and DD runs

anyone who claims Matt Fraction is a good writer.

fortunately I have more supporters than nemesie's on this topic.

and some nemesie's (like Fear the Living) and I get along quite well, as long as Fraction isn't the topic.

maybe even a Paragon of the Barbarian Class that gives extra Bonuses to each... (maybe extra negatives to something else for balance... like Charisma. :P)

I think it would be helpful to all those who don't play Pathfinder (or D&D 3.5) to note that non-heroes (the average citizen) have 10s and 11s for all stats (Str, Dex, Con, Wis, Int, Chr)

just shows how much MORE Wolverine is stated above normal

He is not an entirely different character. Billy was still good in the new 52 Shazam said as much when he gave him his powers. He just isn't Jesus anymore. Billy still stands up for what is right regardless of personal loss, he still idolizes Superman, he still is protective of his family etc. You just seem to dislike his new personality; him being rougher around his edges. Something that ultimately has no impact on what he does as Shazam and what he stands for as a hero.

Yet you're totally okay with arbitrarily changing a characters sexuality because, apparently, that part of a persons identity doesn't matter unless you're LGBT.

You can be outraged, that's fine, but at least be consistent within your outrage. You say, "that's not who he is..." I could just as easily say Alan Scott is(was for over 60 years) not gay. Or Selina is(was for decades) not bi.

Captain Marvel is another character with no inherent need to be a specific race, or gender.

did you read Multiversity: Thunderworld

if they had a black Captain Marvel in that issue, it would still be Brilliant without changing the character in the slightest. it would still be one of the best single issue comics I have ever read (I know @captainmarvel4ever would agree with this.) the race change would have no actual change to the character (just like making Alan Scott Gay, doesn't really change his character since his Sexual Orientation (like Billy's race) has NOT A SINGLE IOTA of bearing on the general makeup of the character...(making Hal Jordan Gay WOULD be a different story since his identity as a straight man is a HUGE part of his character)

reading the Shazam based titles in New-52, do Inherently change the basis of the character by screwing with his whole ideology and other personality aspects..

the changes made to Shazam in New-52, are all minor changes, BUT with a big impact, a big of impact as say....giving Bruce Wayne a gun on his utility belt,