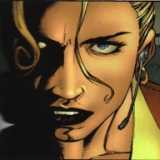 The moment of truth approaches...

Abilities: Elsa possesses no superhuman abilities, but is highly intelligent and educated. She spent her formative years in an elite military academy, and the physical discipline this instilled in her is evident, as she keeps herself in top physical condition (none of her physical stats would be considered "peak human," but she can generally keep pace with anyone below an Olympic level of athletic development), and carries herself with an unyielding confidence.

Skills: she earned a degree in political science and her MBA by the age of 24, and has spent the past few years quietly working behind the scenes in the Alaric Foundation, attending to a number of day-to-day functions for her late father, Gunther Beremud. Business-savvy, politically opportunistic, and with a penchant for long-term strategy, she would have made her father very proud, had he ever deigned to view her as anything other than another useful tool. She has dabbled in a number of combat-related skills, and although she is not an expert combatant, she can fire a sidearm with reasonable accuracy and competently defend herself with a smattering of hand-to-hand combat techniques.

Personality: frequently comes across as cold and aloof. Her voice has been described as "velvet-coated steel," and her gaze can be downright icy, particularly when someone has earned her ire. As the heiress to her father's extensive holdings, she maintains any necessary social, political, and business relationships, but has virtually no close friends or confidants, at least any that are publicly known.

The following is not public knowledge!

"Elsa Beremud" is not truly the daughter of Gunther Beremud. She is, in fact, a species of alien known as a Replican. Replicans are vaguely reptilian humanoids who possess the ability to morph their physical form to match any other biological organism of approximate size that they are able to make skin-to-skin contact with. This ability will perfectly duplicate the physical appearance of the copied, but not their abilities (for example, they will not become any stronger or faster, and though they may copy natural weapons/armor, they will not be any more durable than the Replican's original body tissues, which generally means the approximate durability of human bone). The change is complete enough to fool most forms of detection, including fingerprint and retinal scanners, voice recognition, and scent. The only known way to determine the difference between a Replican and the being they're impersonating, aside from a full DNA analysis, is psychic or magical detection. Her true identity and allegiance have yet to be revealed.