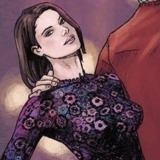 2 erroneous opinions of fans of S/WW about Clois.

The failure of the DC

In October in the Top 10 all comics Marvel. DC is not in this list.

In April, sales results proved, that the fans want to see Clois and Wonder Woman / Steve Trevor. Two comics with Clois and one about Diana / Steve sold much better, than comics SM / WW. DC, GIVE FANS WHAT THEY WANT TO SEE!

Clark Kent and Lois Lane were a couple and will be again in the new 52! Convergence 5 confirmed the Lois’ words about romance between her and Clark.

Earlier this month became known that Lois with Earth 2 became Red Tornado.She can transition from gynoid to human.This suggests that in the near future will return Clois. Doppelganger Superman with Earth 1, who dreams about what has Kal-L - to be in relationship with Lois. But his Lois has a boyfriend and he meets with wonder woman for fear of loneliness. On many websites relations Superman and Wonder Woman is often criticized. Many call them boring.

An excellent possibility to check up, with whom attitudes of the Superman are more popular - with Lois or with Wonder Woman.

Lois Lane as a driving force.

Recently I was often notice that one of the main reasons why Smallville Season 11 and Superman Unchained more popular than all other comics with Superman because in the comic Lois plays a considerable role.Released at the end of July, "Superman. Annual 2" in which the main role was given to the Lois Lane is sold better than "Superman" and "Action Comics." DC should pay attention to this result and increase the her role of the two comics about Superman.And to release her solo series.

5 reasons why Superman should be with Lois Lane.

As soon as I began reading the comic books about Superman in the restarted universe, I thought, that comics will be interesting. But I was mistaken.Action Comics was interesting because Morrison wrote. Another comic book, "at the helm" which worth Scott Lobdell, I believe unsuccessful. Apparently not only I think so.Poll ComiXology confirms this.