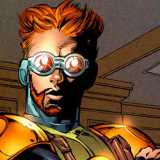 Punched Poseidon in the face

There were two of them on the quay : Battalion and the man he had encountered a couple of hours ago on the train, the man who killed Danny Landesman the owner of the famous weapons company called Calliber two days ago. His name's Rick Ramsay, and he's being chased. " Get out of the way ! " He shouted, knocking over a lady with his elbow as he continued his escapade. The guy next to the lady (possibly her husband) helped her up, and was about to ask her " Are you alright ? " but was abruptly interrupted by Battalion who  accidentally pushed him over. " Hey, watch where your going ! "  The man bellowed, shaking his fist up in the air as a sign of anger. Battalion felt bad about that, and was going to turn back and apologized. When suddenly, his intercom rang with the sound of a woman in her early twenties. " Vinci ! " She said, " Forget about him and continue the mission. Do you know what would happen if that guy escapes ?  " Battalion started to sprint again, he already knew what she was going to say. It was " More lives will be lost. " And he will be the cause. Again.

The target Rick Ramsay was a few meters away from his chaser, and was running away as fast as he could. He knew he had to find a place to hide, to take a rest, to settle this once and for all. But where ? There are no empty buildings here. Or so he thought. The truth is, there's an abandoned warehouse near the docks in front of them. And Battalion knew that sooner or later Rick's going to have the place in sight, and will ran straight towards it without a second thought. That's how guessable common crooks are. A few minutes later, the warehouse was in view. Rick, as suspected went inside it and hid. Inside, he hid behind an old blocks of crate, scattering his gun and ammo to the cold and moist ground to count them. He knew if he was going to defeat Battalion, he was going to need a lot of ammo due to his enemy's duplicating abilities. But alas, his ammo was at an all time low.

Battalion stopped upon the front of the rustic warehouse, he wasn't going to get in through the main entrance. No way. You might as well put an " Enter here to die " sign, to make it more obvious. Rick's  probably already taking aim right now. Safe, behind cover. That's why he needed a new entrance. Battalion slid his fingers along the jagged metal wall, creating a rattling sound that Rick could could probably hear from inside. He was searching for a soft spot to punch. Recently, Battalion learned that he can multiply his muscle cells to increase his strength three times more than normal. Which was good, really good. Battalion stopped when he felt a bent in the metal wall, it was located near the edge of it, near the turn to a narrow path on the side of the warehouse." This is perfect " He said grinning. He took a few steps back from the bent wall, and started to concentrate. The green lines on his costume glowed, and he can fell that the cells in his body was duplicating. The change of weight and body structure could also be seen, he was now ridiculously muscular and was 4 inches taller than before. " It's go time ! " He roared, punching the wall with all he'd got.

The walls were blown away like dust in the wind. It collided with the stacks of crate, and tore it apart. Sawdust was flying everywhere. " Aggh.... f**k ! " Rick shrieked, his cover was completely destroyed. He had nowhere else to go, he was completely cornered. Like a rat in a cage some might say. " Rick, Rick, Rick. " Battalion entered the warehouse through the gigantic hole in the wall, his nerve pulsating from the overgrown muscle. " Do you really think you can escape me ? "  He asked, walking closer and closer to Rick until he was finally face to face. Then with a swift and sudden move, Battalion grabbed the man by the collar of his shirt, lifting him high enough that the he had to to tiptoe to avoid strangulation. Rick was too scared to answer the previous question, as he was stuttering out muffled words. So, to put him out of his misery, Battalion finished him off with one crucial blow that made him unconscious. " Well, a job well done. " Battalion said, sliding off the unconscious criminal from his hands and into the ground. Now that that's done, all he needed to do now was to report back to mission control and go home." Sam, the job's done. Rick's been captu-- " Battalion stopped midsentence. He's hearing a weird sound coming from above him. What could it be ? He thought, turning his head upwards, he saw a green beam of light. And the next thing he knew, He was in a whole new place, a whole new landscape. He was in a- he was in a..... training camp funded by the murderous millionare.  Ziev.