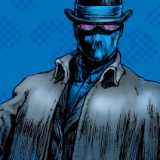 I posted a similar thread like this last year and was curious to see what the results would be this year. I am again compiling a list of the worst comic book covers of 2011. What cover(s) do you think were the worst this year?

I'm trying to put together a list of what I think are the worst comic book covers from 2010, but I'm having trouble finding anything really bad.  The closest I could find was just because I thought it was too simplistic like the rest of the series' covers.  Any suggestions?

So, I've been asked to write about the best single issue of 2010, the best event that happened in 2010 and the best artist, but I'm completely lost about what to do.
I was thinking for best artist Frazer Irving because I loved his work on Batman and Robin but I have not seen his work in anything else.

Anyone have any suggestions?  Thanks!

Hey, for all of you wondering (though I'm sure there  aren't many or any of you since I have not been on this site long) wondering we're I've been I have been writing reviews for PlayerAffinity (comic book reviews, of course!).  Just the reason why I am not on at all any more and probably will never be back on again - unless I'm looking up some helpful comic book information!

I'm back!  The con itself wasn't as fun as last year (I got 200 comic last time).  This time I only got 137 comics.  I got a ton of Spider-girl comics, Sandman Mystery Theatre comics and quite a few "Bat Books."  I was very happy to get an issue of Batman that was the first appearance of Stephanie Brown (the current bat girl), Tarantula, and most importantly, the first appearance of Conner Kent in Adventures of Superman #500.  I also got the first issue of the Spirit from the mid-2000s.
I managed to read three of the ones I got during the ride home.
Lobo: Highway to Hell #1 (of 2) wasn't as great as I thought it would be, but it did have some classic Lobo moments.
Sandman Mystery Theatre #2 had an awesome first issue, and while I don't think the second issue lived up to it, it was very good.
Small Gods #1 was amazing!  I've never heard of it, but it was published by Image (Spawn, Savage Dragon) so I decided to try it.  There were the first parts of two stories (there really should only be one since the second is really short and NOTHING happened).  The first story was great.  It was about psychics (mostly pre-cogs) being a proven fact of life and how several laws restricted them from doing certain things.  I recommend checking it out.

I want to start doing reviews, so maybe in the future if you want more details about the above comics I'll try to make them.

I also got 6 buttons (of Power Girl, Joker, Bane, Red Robin, Batman and Harley Quinn) and a WildPig Con 2010 T-shirt.
All in all, the con was a success!  I hope your weekends are going well also.  Drop me a comment and tell me what you're doing.  Are you going to a comic book convention?

Best Book Ever and WildPig Con

I am currently reading the best book ever!  The Return of Swamp Thing is a novel of the motion picture (which I've never seen).  Unlike the remade first movie, this book introduces Abby Holland, one of my favorite characters from the pages of Swamp Thing.  It's the perfect twist between horror, science fiction and romance.  This novel provides non-stop action and characters you love and the deadly villain Anton Arcane.  If you're a Swamp Thing fan and need a novel to read, this is it!

On another note, I'm going to the second WildPig comic con tomorrow (where all comic are a dollar and all graphic novels are 50% off)!   I went to the first one and got 200 comics, including a huge assortment of Batman and many other titles.  I'll let you know the best stuff I get later!  I'm hoping it will be just as fun as the first one since I have $100 to spend!

If YOU want more information about WildPig comic con, go to wildpigcomics.com.

Have a great weekend everybody!

Hi everybody, I thought I'd jump into the blogging world after coming back from a very successful comic book convention.  I got 137 books, and a lot were ones that I have been looking for.  Some of the rarest comics I found and bought for a good deal were:
From Hell #1 (1991) FOR A DOLLAR.
The Omega Men #3 (1983, First Appearance of Lobo) For five bucks, but it's worth it to see one of my favorite characters in his debut.
Watchmen #2 (1986) For four bucks.
Strange Adventures #205 (1967, First Appearance of Deadman) For $3.50.  I was very glad to get this for a low price.  I like Deadman a lot.
Spider-girl #0 (1998, reprints What If... #) For five bucks.
And 12 collectible Batman buttons!
It was a great show, and I have another this weekend that is all 50 cent comics!  I'll let you know what other treasures I find in the future!
So far I have a growing collection with approx.2500 comics in it.  If you ever wanna talk comics, I'm your girl!
Have a great weekend everybody!