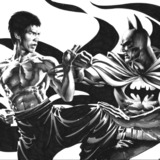 So with an angry heart and eyes full of rage...

I am doing an @the_impersonator and getting in early :)

These are the last words of Chōsokabe Takakazu, former samurai of Lord Shinzo Kumoyuki. When my master was slain three winters past, I did not follow him into the afterlife. I remained…a coward perhaps. But being a man of the blade, I found work as a sell sword which is essentially murder prostitution.

When the siege of Osaka happened, I was hired by the Tokagawa shogunate. It was two years of slaughter, blood, and fire. Finally when the castle walls fell, I was first inside swinging my sword like a scythe through wheat. By my side were dozens, hundreds, of other masterless samurai as in the years previous many of my brothers had joined the sea of wave men. Osaka was taken and the Tokagawa were successful.

This should’ve ended my service with the shogunate. But the eight year old son of Toyotomi Hideyori, Kunimatsu, was taken prisoner by myself and I escorted the boy back to Kyoto.

Upon reaching Kyoto he was presented to the Shogun and judgement was rendered. Beheading. And that task fell to me because none of them had the stomach, resolve, or coldness.

This is the reason these are my last words, as I beheaded a child for the princely sum of twenty koku.

Any good I did in my life was made forfeit by the blade through the boy’s neck. Any chance of a restful afterlife was forfeit when his head hit the floor. Any right for me to remain alive was forfeit when the dead child’s eyes locked on mine.

(Based on real events that occurred during the Seige of Osaka 1614 to 1615 and its aftermath, in which an eight year old boy was murdered because of who his father was)

@bumpinthenight: Well just sent you two, and you made one too :)

@ficopedia: maybe, it's just been around when I've been looking :)

@oscuro and @wildvine you're up to vote :)