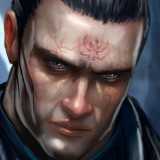 BP can beat Beast, Wolverine, and Colossus.  The rest would stomp him.  Since this is a gauntlet, he stops at number 1.  And yes, 616 Kurt has teleported with a single body part.  He just doesn't do it because of his morals.  He did it to Warlock's father Magus in the early eighties.  He teleported his leg off.  Later in the same issue, Rogue did the same thing to Nimrod after absorbing Kurt's powers.  Kurt is faster, is a serious teleporter, is experienced.  With morals, it'd be a close fight, without Kurt stomps.  And anyone who thinks that BP even has a tiny chance against Cyke or Mags when they have their powers, morals or not, is horrifically misinformed, misguided, or an absolutely delusional fanboy.

Rogue or Gambit could solo.  Gambit can destroy him so very easily it isn't funny.  And Rogue has the skills, even if she hasn't absorbed anyone.  This is a stomp.

Kaine has taken on Spider-Man, Ben Reilly,  and Spidercide at the same time and held his own, too. Bane gets curbstomped.

@--Anubis--: Nice to see you completely ignore all of Kaine's other showings, like one shotting Peter, killing Doc Ock, and taking on Spider Man, Scarlet Spider, and Spidercide all at once.  And also ignoring his powerset when compared to Bane.

his recent showings are poor. All that stuff you listed happened 20 years ago

All of his poor/recent showings were under one writer/stroy arc, not to mention his good showings vastly outweigh the poor ones.

Uhhh..Round two he is powerless,and round one Bane has a good amount of PRep.You people seem to just hate bane.

I'd say it's you, the OP who put Bane in a battle way above his weight class who's the one who hates Bane.  Kaine is as smart or smarter than Bane, and has had some downright Machiavellian schemes.  Equal prep time hurts Bane a lot.  Prep is really his forte, but against someone else who is also extremely gifted with prep, who also has prep, it doesn't do him any good.  Yes, without powers Bane wins because he's better at h2h.  Any other scenario against Kaine ends with him getting stomped.  Sorry.
11 years ago

Gambit can charge adamantium.  And he charges objects much faster than he used to.  All he needs is a touch.  Not that he'd need to resort to that anyway.  They're inside a building where everything is fair game for a charge.  One deck of cards would be enough.  Four decks, his staff, inside a building, against someone he'd have no compuntion about holding back against = dead Doc Ock.

#5  Edited By bag_o_x_men
@--Anubis--:
True.  But to be fair,  a few modern low showings don't negate his entire history.   For the most part, he's been impressive, and we really haven't seen much of him yet since his return from the dead.  And it wasn't just Ana, the rest of the family was also involved, and Kravens also stomped Spiderman as well.  Spidey could also easily handle Bane.  Ana is also superhuman, and had prep.  And I'd say she could take Bane as well unless he had prep.
11 years ago

I think, overall, I give Remy more credit than you do and hold Wolverine's healing factor in higher esteem.

Gambit's a bullet dodger. A bullet 'catcher' actually. Cyclops is not. I see Remy one shotting Scott before the reverse holds true. Same for Bullseye. And DD, realistically, could only avoid Wolverine (and this for only so long) ... but him KO'ing Logan is PIS in my opinion. Wolverine soaked consecutive blows from WWHulk, along with many other class 100's without going 'light's out'. DD is way out of his league.

Cable without tk/tp is absolutely no match for even a wounded Wovlerine. That, and a modern day Wolverine will heal through anything any Spiderman clone can do to him with one full hour of rest. He healed through falling from outer space in less. And I can post at least two instances in which Wovlerine tore free of Spiderman's webbing. Two more where he pinned him, and two others where he soaked multiples of his blows with ease...

Silver Samurai is an easy win. Easy. For either Gambit or Logan. Sabertooth loses more often than not to a serious Wolverine. Again, after one full hour to heal, modern 616 Wolverine will be good as new for each battle.

The rest I agree pretty much.

Thanks.
Yes.  Gambit is definitely a bullet time character.  I have lots of scans to prove it.  But so is Cyke, and actually, it doesn't matter whether Scott is or not.  He won't have to dodge nearly as much as Remy, since he has a significant range advantage, and accuracy advantage.  And Remy will have to dodge.  He can't block optic blasts like he does bullets.   He'll have to dodge, and I think Scott can tag him before the reverse.  He's hit Storm in flight, Angel in flight, Spider Man, Quicksilver at full speed, and Northstar at full speed.  All of these characters in these situations are faster and more maneuverable than Remy.
I mostly agree about DD.  For the record, I think Wolverine is slightly superior in h2h.  I think he'd take DD more often than not, but Remy will beat MK before Wolvie can down DD.  The double team will quickly overwhelm Matt.  I also think Remy could take DD 1on1.  But he's a better match for MK than Wolverine IMO.
I disagree about Cable.  You're very much short changing him.  He is one of the few characters in Marvel with more combat experience than Wolverine.  He is definitely superior tactically.  He and Cyke have experience working together, which negates the previous teamwork advantage that Logan and Remy had.  And with his standard guns, he's going to be a serious threat.  Especially after Scott tags Remy.
Wolvie's hf is up and down, and not what it was a few years ago.  I think the writers have a tendency to gloss over how long it takes him sometimes.  In issues where they specify time, it takes him a while to heal serious damage, like organ damage.   Yes he can soak shots from SS.  But Cardiac is a 10-15 ton character too.  If he has to tank them both, and if Cardiac tags him with his staff, that will be a lot for his hf to cope with IMO.  Falling damage is often negated by his skeleton.  It's not the same as a direct shot to the liver or spleen or kidney from Cardiac's staff.
I've seen him cut his way out of webbing afew times, I've also seen him immobilized a couple of times.  In general, I agree between his claws, his strength, and his skill, he shouldn't be in too much danger from webbing.
I agree that both Wolvie and Remy can take out Silver Samurai, but I think you're short changing Sabertooth.  He was poorly written the last few years before he died, but for a very long time he was uber dangerous, and used to beat Wolverine on a regular basis.  I miss the old days when Sabes would show up on Logan's birthday, beat the crap out of him, kill a few people, and disappear.  But Remy and Logan together will be to much for Sabes here.  If they happened to get past Scott and Nate, which I don't see happening.
11 years ago

#7  Edited By bag_o_x_men
@--Anubis--:
Nice to see you completely ignore all of Kaine's other showings, like one shotting Peter, killing Doc Ock, and taking on Spider Man, Scarlet Spider, and Spidercide all at once.  And also ignoring his powerset when compared to Bane.
11 years ago

Susie stomps.  She's the most powerful member and can take all three others at once.  As has already been stated, she can smother Johnny's flame, and contain both Reed and Ben.  Ben doesn't have anywhere near the strength to even stress her shields.  Then she just holds them until they pass out from lack of oxygen.  Or she makes their retinas transparent and forces them to quit or stay blind.  Or she can use her shields offensively to get ko's.  And these are options for if she's being nice.  If morals were off she could easily kill them if she wanted...bubble in their brains, lungs, heart, etc... shield decapitations, shield crushing, suffocation, etc...

Deathstoke is far physically superior to anyone here.
That said...Taskmaster has defeated opponents of Deathstroke's physical level.  The problem is, he's never beaten someone at that physical level, who also has the skills DS has.
Hush is easily the weak link.  Whoever he fights will beat him.
If BP or Tasky end up against Cheshire they should win fairly quickly.
The only real problem is DS.  I think it will end up either Tasky and BP against DS.  Or it will be a full 3on1.  DS still will have a good chance of winning.  I'll give a tiny edge to Marvel for Tasky though.  I think BP will b enough of a distraction to let him get a read on DS, and BP may even last long enough to continue to distract him until Tasky can land something to take DS out.  It won't be easy though.  This is like a 55-60% in favor of Marvel for me.