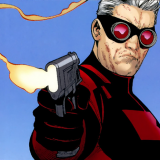 Jason Reed is an Ex Marine with a flair for the dramatics and is driven by an ambition to better than anyone else. After being dishonorable discharged from the military he became Internationale hired gun for a right price. He is credited as the man who can shoot you in the back while looking you in the face.

Backstabber is a mutant with the ability to see and control trajectories. In other words he can shoot or throw an object in any direction and still have it hit his intended target. He is a peak human athlete and fighter plus with his mutant ability he can predict and defend against an enemies attack while in motion. He can also turn any object into a weapon and throw it with such force in can break steel. Finally as all mutants he has a healing factor that can heal him from fatal bullet wounds in seconds.

Goggles - Does Absolutely Nothing

The True Story of Backstabber