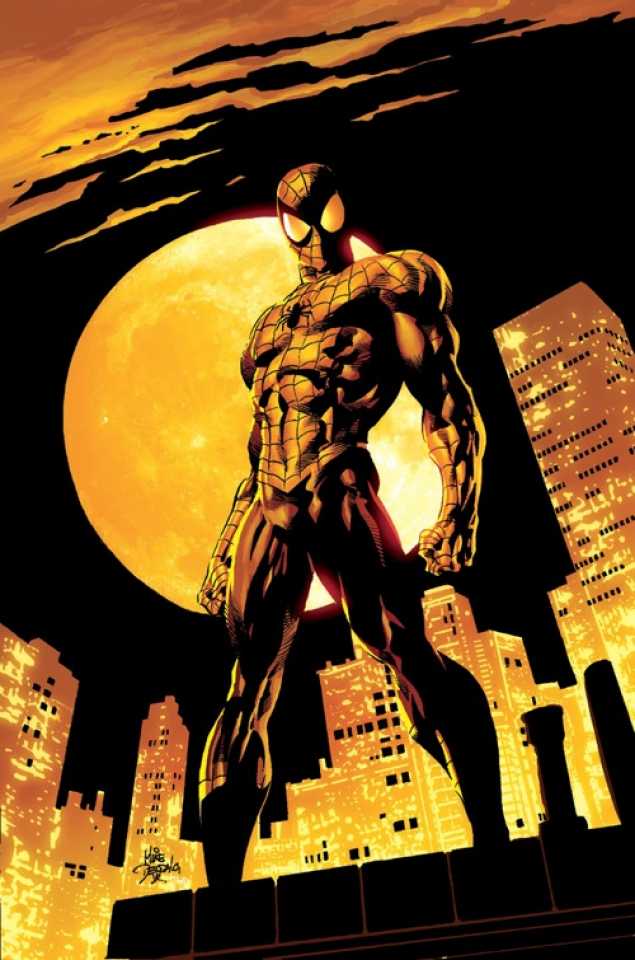 Blessed with the godly gifts of power like a spider, Aidan Radke is an aspiring crime fighter. On the alternate, he's a freelance photographer living with his grandparents in Jamaica, Queens.

Spidery superhuman strength - Aidan doesn't work out, but his power makes up for that, boosting his strength to levels beyond what a human would normally be capable of. His lower limit is somewhere around 20 tons without much effort, depending on things like size and shape of the object, how he lifts, and other stuff that may or may not come into play ever. He can jump many feet in the air in a single bound, break bones, and shatter concrete. He's also got pretty tough lungs, though he doesn't go around blowing on bad guys, because it's kindof weird.

Speed, agility, reflexes - He can easily react to things like automatic gunfire, even at short distances, and his reflexes are further bolstered by the spider-sense. His speed, balance, and coordination would let him perform acrobatic feats to match and surpass that or a fully trained Olympic athlete having dedicated years to perfecting their art. (Sometime it's a small subject of guilt, not having to work for it)

Stamina - Due to increased muscle efficiency and bodily control, he can keep up exercise and strenuous physical activity for many hours at a time before requiring rest, and required rest periods are shorter than most. Fatigue toxins do not build as quickly, and with a bit of extra effort, he could further slow this to a near stop.

Durability - His skin and smallish frame wouldn't suggest it, but Aidan can take quite a bit of punishment and keep moving. At normal, he can easily take punches from peak level humans without being much worse for wear. If he happened to see a hit coming and were to brace himself for it, he could withstand multiple shots and trade blows with super strengthed beings, or cause some people to break bones in hitting him.

Heightened sensory function - That means the five normal senses. He's got a "beyond perfect" visual acuity and can see farther and much more accurately than normal people, and an attention to detail that borders on clairvoyance at times. Even small sounds like the dropping of a pin through soundproofed glass could be rendered detectable to his ears. He's done pretty well at discerning sounds and filtering, through a bit of practice. Though he doesn't typically go to smell, due to the fickle nature of scents and the desire to maintain dignity sometimes, he can tell what's in a recipe by smelling it, or by smelling a person's breath after having eaten it. He's also good at reading by touch and feeling things, like vibrations from movements on concrete, as a spider would an insect caught in a web.

Minor accelerated healing - Nothing too big. It does grant him a recoverability the likes of which normal people would never see, letting him recover from broken bones and wounds much more quickly, and aids in fighting off toxins, including the fatigue toxins his own body produces and some foreign threats.

Most prominent of his power is organic webbing produced directly from his body. Typically they're light and quite durable, just like a spider's silk, and can be used for a variety of purposes. His webbing is pound for pound more durable than steel, and many times more light. The way they come out seems to be triggered by a function in his brain, controlling things like viscosity, adhesive property, how malleable, ductile, or stretchy it is, and sometimes the amount he can produce is controlled by things like mood and feelings. On a bad day, his ability to produce webbing might fail, but on a good day he could produce seemingly endless amounts, though he would need to stay nourished, fed and hydrated to support such a high demand. To avoid his product sticking all over the place, some varieties are made to dissipate after short amounts of time.

Spider-Sensicals - A kind of precognitive sensing ability that warns him when danger is nearby or approaching, and raising reaction time so he can often accordingly avoid incoming dangers. The nature of what kinds of things exactly set it off has not been learned, but it's pretty handy in a pinch, and he's quickly learning it's not really something to be taken lightly.

A control over electrostatic forces between his own body and things immediately touching enables sticking to practically any surface, instead of mutual repulsion in adjacent electrons, a mutual attraction allowing for the stick.

Venom - Aidan can make different kinds of venom inside his body for use, like spiders of all kinds. Not limited to a single type, he can "manufacture" different kinds, differing in such things as dosage and potency. They could be made to mimick the venom of a certain type of spider, or be a completely new blend he made up himself. Sometimes a "sting" could cause as little as a small discomfort. Other times, venom could be tailor-made to take down certain superhuman varieties, even those with accelerated healing (if only he proper practiced and knew). Important to note, he produces venom, and it id injected into the target. He could secret venom through fingertips (aww, stupid gloves!), teeth (Mask!), or, as is his preferred method, a pair of "stingers" that emerge from the centres of the backs of his hands. It hurts, when they come out, and though he heals, there's usually marks left on the backs of his hands a while after he uses them and retracts. Mimicking different kinds of venom from various spiders, he could synthesize his own anti-venoms for these, or for the venom of his own "recipes."

"Arachnopathy" - A word he likes to think he invented, or at least will popularize, maybe. Aidan can "commune" with spiders, and though they are often solitary creatures, he can command them as he pleases. He could also use them to sense remotely, as things like eyes, ears, and the others, though most spiders are blind and therefore useless for the eye bit.

Sewing/knitting - You just thought "pansy," didn't you!? Well shut up! It's handy.

Unpracticed combat skill - He's got a freeform combat style that's actually pretty effective, maybe, sometimes. It works on bad guys so far, okay, and all that without any practice!

Chemistry - Gotta be, dealing with all those toxins and stuff.

Camerawork - Technically a tech thing, but specialized enough for character purposes to warrant its own section. Trying to be a model? He's your guy. Got a newsworthy story and need pictures, or a video? Look no further. Senior prom coming up? No problem, beauty queen. Just keep your boyfriend on a leash and Aidan Radke's sure to get your good side all night long!

The suit - hand-sewn himself - made with his own spidery silk organic webbing and some dye. As mentioned before, it's pound for pound more durable than steel, and virtually weightless (See? And you still thought he was a pansy. Probably still do). It's good at being bulletproof, and pretty stab-proof too, except when you get the tips of the blade in between the - never mind. And because it comes from the webbing, hasty, somewhat effective repairs can be made in the midst of a tight spot scenario. The eyes are different, though. The lenses function like two-way mirrors, where he can see the outside world through them, but no one can see in through to him (because there's technology that can pretty much discern you with stuff like that, and people too). They provide special sights and block out overexposure from looking at the sun, glares, and keep stuff from getting in the eyes.

That's what I got at this point. I'll probably throw in a camera and maybe stuff sometime later.