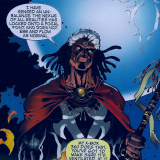 Quick apology to the Young Justice staff. I'm sorry I almost got mad at you for your choice of voice actress for Rocket. When I heard the way she talked and saw her mannerism I kind of got pissed. To summarize my rant it went something like "It's 2012 and that's still the way we get portrayed as sassy blah blah blah...". However after calming down then rereading my Icon tpb it dawned on me ok that is a pretty accurate adaptation of the character. So oops sorry for the almost outrage. My bad dog, we cool?

So, I just got finished reading through Panther's page here on cv and reading some really good forum posts on Black Panther, Wakanda, and all things related. When I came across this post.
@Osiris1428 said:


One more thing: It's funny to know that on Marvel's website, because of American Panther, Black Panther FINALLY has a separate thread all to himself. Wow, it took all that. Or should say, it took that!?!?


Look, Marvel, it's simple: There are OBVIOUS things in Black Panther's story that should be fleshed out that you seem to ignore it in a desperate mad dash to make Panther more 'relevant'.
1). Flesh out the marriage between T'Challa and Storm. Deadpool and his inner monologues/personalities have a better fully realized relationship.

2).Wakanda. Why don't you for a couple of issues give us a better idea of what Wakanda is like to live in. It's citizens, it's problems. Is there no crime? Are there any mutants for Storm to teach/lead? How big is it geographically? Different factions of its military and government? How are their weapons made? Population size? Are there different cities/tribes within this nation? How are they ran? How has Wakanda fared since losing all of it's vibrianium. If Captain America still has his shield, is it safe to assume that not all of the vibrianium is gone...which brings me to my next topic...

3). Where did the worlds vibranium really come from? SPACE TRIP!!!! It came from space, but was it on purpose. Was it like how out moon was formed, by sheer accident, or, was there something...alien??? Have you guys ever seen that movie 'Mission To Mars'? In the story they basically found out that all life on Earth was started by life on Mars. That could be the inspiration for a story on maybe not just getting the vibrianium back, but where it came from. Who is to say, I mean how far back in the history of Wakanda does the precious metal go-the beginning of time?


This post got me to thinking what if Marvel actually took this advice and rebooted Black Panther and fleshed everything out like the city and government structure, the panther cult and other surrounding tribe cults, religion and culture of Wakanda, and Vibranium. I would be ecstatic but my question is who would be the man for this job? Who would be able to handle the research and the responsibility of creating all this backstory and do it right. Well in my opinion the man for the job would be Jeremy Love. He did a great job creating his own world in his story Bayou. However, that's the only thing I've read from him to base his ability to do a competent job of undertaking this task. So my question to you Viners is who do you think can do the job right and why?
25 Comments

I just got finished reading the latest chapter of One Piece and I have to say I'm so excited! This is one of the few mangas that I have read consistently and I have never been disappointed. The one month was worth the wait. I can't wait to see how everyone looks different and how they have changed and what they've been doing.

Hello Comic Viners my name is Augustus and I'm addicted to quests. Since I've joined the site yesterday all I've been doing is power questing. I don't know if it's the sense of accomplishment, the creative way it's done, or me being able to pat myself on the back for being so smart but I'm addicted. So here's to comic vine, to my fellow questers, and me getting my vanity smurf set.