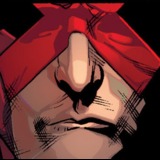 @edwardwindsor: I feel like if it had been any actor but Pitt, he wouldn't have had the same impact as a character.

@the_last_samurai: Ha! That scene was brutal. Showed how well practised he was at f*cking himself up though.

@ziah_darksong: S'all good, we didn't clarify that they only worked on Obi's armour.

@ziah_darksong: (Just so you know Assault isn't armoured, only Obi is.)

Relief flooded back into the masked Jacob Stark's frame and washed over the despair that had made itself comfortable within the depths of his stomach. The momentary belief that his ally had perished in a cruel blast of light could have had colossal effects on his performance as a combatant, emotions lost to the feelings that came with the loss of life and the connections cut off from that loss. Assault recognized the ploy immediately and gave his friend's efforts an infinitesimal chuckle of approval, already back on his feet and closing the distance between him and the airborne pair, flying towards the rooftop opposite him once more.

Assault would not allow her to complete her sentence, already half a metre away from her defensively postured being with a masterfully formulated attack sequence at the forefront of his consciousness and a body designed to combat opponents such as Darksong the Destroyer. Carried forth with an incredible amount of momentum and speed, the only option for the resolute vigilante would be forward, either low or high. He opted high, but masked his intentions at the last instant by feinting a drop of the shoulders, converted into a succinct roll from where he launched himself over both her and Obi's heads, hitting the small stairway exit building atop the roof with both feet and using it as a platform off of which to leap again. Continuing the fluid momentum, he bent his knees and absorbed every ounce of strength within his powerful body, releasing it all as he pushed off and sailed backward through the air in another elegant back-flip, both feet coming down at Ziah's armoured chest with the intention of aggravating not only the damage done to her collarbone earlier on but increasing the area of affliction regarding said injury. The blow packed enough force to create a shockwave of feedback upon impact.

@pyrogram: It is yeah. Almost saw it today, but had been on the road all day and the family and I were tired. Didn't want to wait the two hours till show time.

@pyrogram: Did you go see it?

@emperor_von_doom: Exactly... I got game bruh.