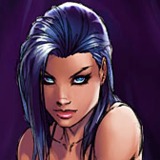 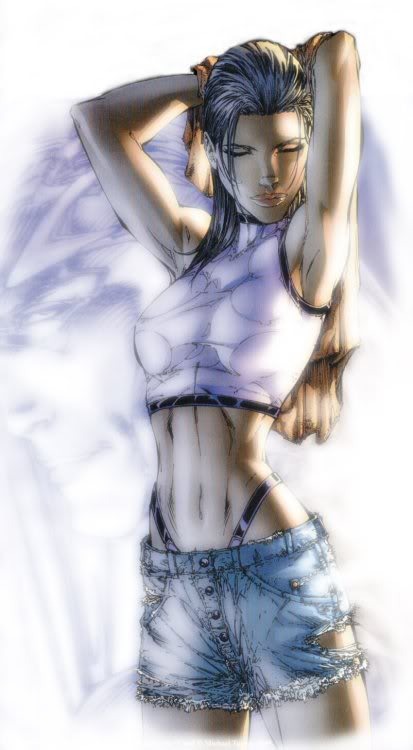 From the moment she was born, Alyssa Turner was destined to be a child of the sea. Born to a pair of farmers, like many others in the village of Llangennith, she took to the beach from an early age, quickly interested in surfing and swimming. These would shape her behaviours for most of her life.

Alyssa often helped her parents on the farm they owned, preparing home grown and homemade products to sell at the local produce market, while spending much of her spare time at the beach. A swimmer, among other things, she maintained a perpetually athletic lifestyle. If it involved physical activity, she was there. She took an interest in surfing after getting a job selling equipment around the beach, eventually taking up the trade herself.

She was a natural. The water seemed to favour her, no matter what she did. Go figure, it turns out she was a mutant with a related ability. But unlike many others, hers was discovered mostly innocuously while in the bath. She kept it to herself and continued life normally, not particularly caring for the use of the power, save for a few trivial occasions. It only became a prominent feature in her identity after she went off to college; particularly, an event in which a student discovered to be a metamorphing mutant was jumped and beaten to death by his friends, an incident Alyssa witnessed alongside her roommate. Shortly thereafter, the roommate disappeared, and Alyssa left college not long after then, though without the knowledge of her parents.

[To be added upon (probably) later.]

Alyssa is a mutant, possessing an X-gene granting her a strong relation to moisture. On a basic level, she previously found herself able to manipulate water, so long as she has made contact with its molecules, a body of water, or with a container or holder with water inside. However, she was initially unable to remotely control it from a distance, though once making contact, able to maintain control, so long as she did not break the link made by her concentration. Through training with Ivana Strigidae, Alyssa has developed more control and stability in using her ability, able to manipulate larger portions of water, as well as other liquids, even from a distance.

Hydro-sonar – Within the water or in sufficiently humid environments, a special condition allows her to keep track of all bodies and movements in the same area as she is, including being able to track direction and speed of movement, and conditions of beings in the area. The range of this detection is not known for certain, but it is generally thought that the feeling is strongest when in a relatively close range.

In addition to her control over water, Alyssa’s mutation grants her a physiological boost. A swimmer and athlete, she maintains her naturally athletic body, boasting impressive speed, stamina, and strength, and through her training with the Arcani and the Orochi, she has pushed herself beyond human limits. Additionally, her mutation provides even larger boosts when covered in water, allowing her a kind of physicality even some metahumans could not hope to match. Through generation of pressurised jet streams, she can propel herself or others through a body of water even faster than the natural swimming speeds of some sea creatures, though extensive use of more powerful jets may cause problems, such as fatigue or other self-injury.

Arts of the Arcani

Seeking to maximize her training and potential, Alyssa made sure to devote a great deal of time in her training with the Arcani and Orochi to learning at least one of the Eleven Words of Death. Her areas of practise were chosen with extreme deliberation, in order to build upon what she already had, and to make her as useful as possible in operating.

In addition to Khaba and Absolutio, as a means of conditioning Alyssa took to training in Khuenaten, a series of secret exercises and meditation techniques to allow a mutant to tap into their very genes. Her aptitude and prior conditioning has allowed her to master this art relatively faster than the others. It was the third art she took up.

Diligent training has enabled her to tap into the full potential of the genome. Her body is far beyond human. Boasts impressively deceptive strength, capable of bench pressing eleven hundred pounds, squatting twenty five hundred, running a full mile in a minute, and throwing punches and kicks at speeds in excess of a hundred miles per hour. It has also increased the density of her bones and muscles to such a degree that she exhibits superhuman resistance to injury; her body may continue to function through damage that would stop a normal human dead.

Meditation and training has taught her to, at will, enter a trance-like state, directing the flow of her biological resources. This state allows her to heal from nearly any injury in a fairly short amount of time, even those which would otherwise be classified as permanent.

The first art to which Alyssa has devoted her training is Khaba, or Shade, the art of stealth. Having advanced to the level of master, she has learned to use what she has effectively, and continually devotes considerable time to improving upon this as much as possible.

There are as many kinds of stealth as there are means of detections. Typically they all revolve around a simple principle of evading the detector's lines of sight, but there are more advanced techniques.

As a master, Alyssa has learned to control her breathing and heart rate, slow her digestion and even manipulate her body temperature. Long periods of stretching and keen spatial awareness allows her to slip into the smallest crevices or shadow and evade the prying eyes of enemies. She can become next to invisible in any terrain. The slightest distraction and she may simply vanish. In darkness or smoke she is virtually invisible. Her footsteps are nearly soundless and she has trained to such an extent that she can even walk on pressure sensors without activating them.

It is this skill that defines many of the Strigidae; their ability to materialize as if flowing from the shadows themselves, strike and then vanish into the darkness. However, Alyssa is not a Strigidae herself.

As a secondary method of bolstering her present abilities, Alyssa has worked to master the art of Absolutio, the art of Perfection. Although already in incredibly fit physical condition, practising as a master at Absolutio teaches her to further unlock the full potential of her body, mastering it to such a degree that her physical performance has seen a fifty percent increase across the board.

As such, she is capable of neigh supernatural feats of balance, such as walking across tightropes with ease, astonishing acrobatic manoeuvres, and more. In combat, she can snatch projectiles from the air, evade punches by centimetres, execute devastating precision strikes from any angle, and much more. In addition to other training, through Absolutio, her combat efficiency experienced exponential increase, enabling her to perform combat maneuvers from virtually any angle, including freefall combat. At times, she may be noted to perform seemingly, at times blatantly, superhuman feats, evading gunfire or other supersonic attacks. She may run down an electrical line, acrobatically evade a hail of gunfire, tic-tac up a skyscraper, fight on the roof of an aircraft and more. All with an effortless ease that seems, and may well be, superhuman.

In combat, strikes gently caress her skin instead of landing, and her fists and feet fly with staggering power and accuracy. Capable of fighting at near full efficiency at any angle, she is just as deadly in freefall as standing on the ground. However, perhaps most impressively, she has trained to an extent allowing her to evade gunfire and other supersonic attacks.

As an ally of the Arcani, the Orochi, and the Flock, Alyssa has been armed with items from bladed weaponry, guns and explosives, and (light) armor, to other tactical gear and, as per her unique ability, portable sources of water to facilitate utility where it may be scarce.