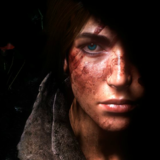 Echoes of the Past

The room was but dimly lit by a sparse arrangement of scented candles along the walls and one on the dresser near the king size bed. The smell of lavender filled the air. Emilie lay with her eyes closed under a violet comforter, mostly still but occasionally adjusting herself in her sleep. Lying on her side, one of her arms rested over the cover. As dim as the candles itself, Abigail's good eye rested on the soft-breathing woman for well over an hour now. Its fixation, the stump at the end of the wrist where there should've been a hand.

She still hadn't been eating well, but despite her gaunt features there was a certain sagging quality to her face. Dark, heavy bags had begun to form under her eyes. Since their return to London she remained restless but still hardly slept. Insomnia was starting to take its toll on her body and mind. Throughout the days and nights images flashed in her mind, waking nightmares of circumstance even when she couldn't sleep. She'd see a figure breaking into the manor to separate them yet again, to take her mother. A different figure most times but there seemed to be a pattern. First it was Charlemagne. He'd caught her unaware, just as he had the first time. The next time it was Ali. Then an odd, never before seen figure, a living silhouette possessing the body of a large man with the antlers of a stag. After that she thought she was prepared, but she had the pattern wrong. The next time she saw Ivana but Ivana didn't do kidnapping. Ivana just slit her throat. Each time she swore it was real—she could feel it happening, but even her relief was tempered beyond help.

It was real enough.

"Not exactly the reunion you were hoping for..."

Abby started awake with a gasp and only then realised she had nodded off. Shit! She hit the floor. Her hand shot for the ruby lance Gáe Dearg, acting on instinct. It shimmered faintly in her grasp. Her head whipped this way and that, first at the door where four guards stood just inside - they seemed completely oblivious - then toward the source of the voice.

He stood in the window, a man of average height with a lean muscular build and broad shoulders. His skin was deathly pale, standing in stark contrast to his chestnut hair, and caused the sprinkling of freckles on the bridge of his nose, faint as it was, to stand out very clearly. Clad in what appeared an old leather armour, he was clearly a warrior and, she presumed, was there for a fight. There was a familiar quality in his jaded viridian eyes. By then she'd seen it more times than she could count in many of the foes she'd faced off with; though it had only recently become recogniseable, when she saw it in herself - the eyes of a killer. The same weary, restless quality as hers was in his. A life on the run, or searching for something. Protecting? Lastly, she noticed a small but distinguishing beauty mark on his forehead, just over the corner of his right eye. Through all of these things, he felt familiar, somehow; though she was certain she'd never seen him in her life.

Wide-eyed, Abigail blinked twice. She shook her head, then slapped herself in the face to an emphatic report and a sharp, stinging pain. Not a dream. She looked over to the bed. Surprisingly, Emilie hadn't awoken.

She stood defensively over the bed, torn between questioning and outright attack.

Who are you? How did you get in here? What do you want?

The intruder spread his arms wide in a mock-welcoming gesture and responded with a smug grin, almost as if he'd read her mind. "I think...on some level you already know that?"

That accent...some kind of Gaelic? But the recognition was only partial. It wasn't remarkably distinguishable or familiar to any she'd had much experience with, but Abby could pick out a few small bits, extrapolated from some of the incantations her mother used when casting spells.

It's ancient...And like that, without a conscious thought the answer pushed past her lips in a whisper. "Diarmuid..."

Then he had to be an ally, right? He was her ancestor, he had to be on her side...Right? Yet her grip held firm on the lance.

"Are you a spirit then? What do you want?"

He pushed himself from the wall and took a few steps. "I want a lot, to be honest. But first and foremost, I want to show you what you need. Though I think you might already know what that is too." In a roundabout way, his head inclined and his eyes turned toward Emilie. The eyes met Abby's and realisation set in.

Par for the course. "Look ye miserable brat, ye've got problems galore. The quiet life don't suit ya. They won't let ye 'ave it...Not as long as they live. An' even if they did they were genna keep on doin' what they wanted, and your conscience is gonna eat at you for it." The wraith shrugged. "I know you've heard it all before so I won't waste a lotta time with the rhetoric. But lookit yer poor mother. My child...Think about what they did to her. And know that I—that you—can't afford to let people like that stick around. That's why we're here in the first place. All of it, yer Charlie-boy, Ivanka, and the others. Her fecking hands, they cut 'em off and eat her fecking hands, the sick fecks!"

As he spoke she felt her own anger rising, at the mention of each name, of each image evoked in her mind. She wanted to let him win her over. If not for her own sake, for her mother's. But she admitted, shamefully so, to herself, that she couldn't be certain it was worth the eternal damnation of her soul. (That is, if she even had a chance left.) Even for her mother...the idea terrified her.

"If ye fight for ideals, you'll only ever be able to save ideals. Know this. You have to accept that it's impossible to save everyone. If y'won't even risk the life of one person, you won't save anyone in the end." He knelt directly across from her now, his hand meeting hers on the lance. "You c'n make it up with yer god later but this ain't a debate sweetheart."

Abigail was unbelieving. She squinted, her head tilting slowly to a 45-degree angle. "But...why? Why do you care? Why do you hate these people? What do you want?"she repeated, exasperation rising in her voice.

"I don't hate anybody." He waved her off, and his mood seemed a lot more sombre then. "Most of all? I guess...Fate was just too cruel. I'd like a chance to do it over. Just a taste, from this life, of the loyalty denied me in my last. I'd rather not see the bloodline me and Gráinne started die out because of idealistic ineptitude.

"And I want you to revive the Fianna. A true Fianna, not like those others. Charlatans. Here our mutual interests manifest action." Diarmuid pulled up on the lance, dragging Abigail upright along with it. "Get your boy. The Son of Cain. Either we have use for the dog...or a vendetta."

With that he seemed to vanish in a brilliant flash of light. There and gone. Abby looked around. She was no longer holding the lance; it wasn't even there. Her mother was undisturbed. Her guards stood watch, unmoving. Their expressions were completely unperturbed. As if they hadn't seen any of it.

I've got to start getting more rest.