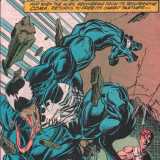 Spider-Man Returns to his Action-era

I am really tired of this drama-era of Spider-Man. What's wrong with this guys, the Action-era was so and they got to replace it with this motherfucking drama.

These are some ideas I got to make to make Spider-Man go back to his Action-era, this time forever.

Peter is tired that the people treat him as a criminal, while Osborn takes control of the superhero business. Then through all that he wish never be separated from the Venom symbiote. The symbiote sense this and leaves Gargan to reunite with its first love. Once they rebonded they form Spider-Venom, and fighting and destroying Osborn's legacy. This Spider-Venom is essentially the Black Spider-Man with a Venom mouth and clawed fingers. Then Anti-Venom (Eddie Brock) listened the news and goes stop spider-venom.

Spider-Venom finds Osborn ask him to say "I'm sorry" but Osborn denies it and spider-venom is prepared to kill him when Anti-Venom interferes and they got fierce battle. Anti-Venom wins.

After their battle, a piece of the Venom symbiote jumps to Anti-Venom and due it take some of Peter's white blood cells, it merged with the white symbiote and turns Eddie into Venom again.

Eddie yells because he thought that he became a monster again, but realized that the symbiote has been purified from its negative by the anti-venom symbiote, and they are merged, the new two-minded symbiote can switch between the Venom and Anti-Venom forms. Then the Venom symbiote in Spider-Man leaves him and return to Gargan, and then Spidey and Venom/Anti-Venom team-up to fight him. Spider-Man and Venom/Anti-venom won.

The Return of Carnage

After months of being on space, Carnage makes his way to go back to Earth to get his revenge.
After he was ripped by Sentry, he was found by Mephisto and offered him new abilities. Then Kasady sells him his soul, and the symbiote gains new powers, and abilities: now it was completely immune to sounds and heat, and also gain the ability to teleport itself wherever it wanted, ETC. Then he returns to Earth to get on the ones that defeated him. He found Spider-Man and Venom/Anti-Venom and fight them. But he was interested on Eddie's new perfect symbiote and wish to absorb it. But Spidey and Eddie defeated despite his new powers. Carnage then abandons the battle and say that Sentry is the main course. Later Spider-Man goes crazy due Osborn's cure while he was bonded with the other venom symbiote. Venom knock him and seek the advice of Doctor Strange to him, to repay all what he did to him when he hated him.

Venom and the Land of the Lost Ones
Eddie seek out the advice of Reed Richards to help Peter, but this one tells him that the chemical had been disintegrated and Peter is now going crazy, and there's nothing to do to save from his madness.

But Eddie don't give up and seek out the advice of Doctor Strange. Strange told him that the only way to save Peter, is to remembering him who really is. Then he gave him a crystal to teleport him to the Land of the Lost Ones. This place is a dimension where lives everyone that had died, and have been lost in the time. Venom/Anti-Venom goes there but he had to face the demons the were guarding the gate. venom beat them and enters to the most amazing world he ever seen. The was by things that once lived on Earth but they die or were lost in time, Including dinosaurs. Venom then had to get 3 people from there, to make peter remember who really is. He take Gwen Stacy, and Ben Reilly, he later finds uncle Ben, but this one says that peter don't need him anymore, that he has now a very valuable friend that is now trying to help him. Eddie then takes the Mary Jane Watson that had been lost in time in the "One More Day" story arc. Then they return safely to Earth, and help peter remember who is. Peter was amazed by seeing both Ben (as Scarlet Spider) and Gwen alive, and Mary remembering that he's Spider-Man. Then Peter thanks Eddie for helping him, this says that it was the only thing he can do to repay him, for all what he done to him in the past. Now there is a problem, now there are two Mary Jane Watson's.

The Return of the Scarlet Spider

Time later, Peter and Ben try to rebuild their past when they are attacked by Kaine and they take on their superhero identities to face him. Successfully defeat him,

but Kaine was just a bait prepare for Osborn to lead them to a trap, he could not believe that Ben Reilly still alive, and wanted both to destroy them (as Green Goblin) by himself. Fortunately the two spider-heroes figured out how to defeat him... and that's exactly what they did. Then the Scarlet Spider rejoined the New Warriors, but just him, but also Spider-Man and Venom/Anti-Venom joined the team to finally stop Osborn and put to his reign once and for all.


Once the New Warriors rejoined, they prepare to attack Osborn's headquarters to stop his reign.