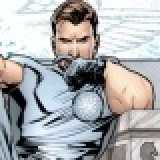 the series is so going nowhere now

I had soo many problems with this issue

for starters I HATED the Wonder Woman bit, so the way to lock her up is basically putting her to choose between Superman and Trevor, what is wrong with DC?

really, this is Wonder Woman?

However I really enjoyed the Flash bit, the idea is really good and even reading about it was extremely interesting

the rest were just boring but maybe it is because im not invested on any of the threads for the characters like Superman feeling guilt over the death of Dr Light for example, I dont care.

but the one that takes the cake is Baz's

without spoilers, it is just such a terrible idea, it is not entertaining and it isnt dramatic or interesting for the character and I hope it is never ever brought back again.

the ending was extremely underwhelming and even confusing because I have no idea how the hell Stargirl escaped but I think it was suppose to be very dramatic and impacting by the ending bit that says "Things get worse" or something.

@faithcl: not necessarily a problem

It is pretty obvious that is Pariah

he accidentally releases a great force of evil name the Anti-Monitor into the world and starts on eating whole universes and for that he is condemn to herald terrible tragedy everywhere he goes. Sounds familiar to a red hooded character who started the new 52?

Everyone seems to assume that it was Darkseid who trampled E3 but maybe it wasnt, and was something closer to the Anti-Monitor which in turn will make this whole Forever Evil arc into the next step to yet a New 52 Crisis.

this issue was basically a very extended fight of heroes punching each other for practically no reason, or because they are possessed or something

as bad as it was, even Avengers Vs X-men had a very good reason to fight each other.

I'm all right with the New 52, but it was pretty messy and wasn't put out well together from the start, but it takes time to improve and it is certainly starting to show it. Just wait for another year or two, all of the complaining about the New 52 would be forgotten.

you are talking like DC are actually learning from their mistakes in order to improve, if that was true then we would have less writers walking from projects, less batman titles and less titles that get canned after just 8 issues

What's wrong with Barbara as Batgirl is that Stephanie Brown is a much better Batgirl.

and that Barbara was much better as Oracle

and that she didnt whine so much

and that she was smarter

and that people respect her more

and that she was the leader of BoP but not anymore

but the article touches on more

Interesting article but nothing that hasn't been touched on before. I agree with the writers overall point even though his whining is like a chore to get through. It was nice to see Babs as Batgirl again but you see how much more useless she is as Batgirl.

The writer is a she.

and yes on one side it very evident how useless Barb is now as batgirl in comparison to Oracle, not only to mention her role as a mentor.

Wow. There's a lot of good points in there. I always thought it was unfair to cut out Batgirls whilst leaving all of the Robins in place, and remove a rare example of disability representation, but I see now that there's even more worse with it than just these things.